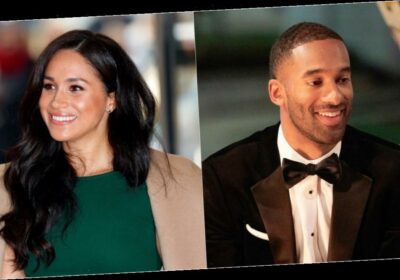 On March 7, Oprah with Meghan and Harry: A CBS Primetime Special aired. During the interview, Meghan, Duchess of Sussex, and Prince Harry sat down with Oprah Winfrey and discussed their experience in the British royal family. Matt James of The Bachelor watched the interview and live-tweeted his thoughts about it.

After James tweeted about Meghan’s revelations on Oprah with Meghan and Harry: A CBS Primetime Special, some fans of The Bachelor began to wonder if James was shading The Bachelor franchise.

Matt James of ‘The Bachelor’ tweeted about Meghan Markle

Oprah with Meghan and Harry: A CBS Primetime Special premiered on CBS at 8 p.m. ET on March 7. A large part of the interview focused on the racism Meghan was the subject of from tabloids and how she received little protection from the royal family.

“Were you silent or silenced?” Oprah asked Meghan.

At this point in the interview, James tweeted, “‘Were you silent or were you silenced..’ hmmm.”

Some fans think Matt James shaded ‘The Bachelor’ with his tweet

James is the current lead of Season 25 of The Bachelor, and he is the first Black man to be cast as the lead of the show. Unfortunately, the season has been filled with controversy due to contestant Rachael Kirkconnell and host Chris Harrison.

While James has issued a statement about the controversies, some fans wonder if the lead of The Bachelor has more to say about his experience on the show.

“This interview seems to be stirring up a whole lot with Matt, I’m just WAITING for him to be able to speak out…,” one fan wrote on Reddit.

“This was a subtweet for sure. He’s been silenced too. Peter was too. He’s been dying to talk and he can’t,” wrote a Reddit user.

At the start of James’ season, Kirkconnell was accused of bullying, cultural appropriation, and problematic social media activity. Photos of Kirkconnell attending an Old South antebellum party in 2018 were then leaked online.

Kirkconnell issued an apology for the photos and took responsibility for ignorance and racism. Before she apologized, Harrison appeared on Extra for an interview with Rachel Lindsay, the first woman to lead The Bachelorette.

In the interview, Harrison pushed back against Lindsay and defended Kirkconnell attending the antebellum party. Harrison has issued multiple apologies since the interview and taken a hiatus from the franchise.

On Feb. 22, James issued his own statement about Harrison and Kirkconnell. In the statement, James said the photos of Kirkconnell were “incredibly disappointing” and watching Harrison’s interview with Lindsay was “devastating and heartbreaking.”

James concluded the statement by telling fans he had more thoughts to share about The Bachelor at a later time.

“I will continue to process this experience, and you will hear more from me in the end. My greatest prayer is that this is an inflection point that results in real and institutional change for the better,” he wrote.