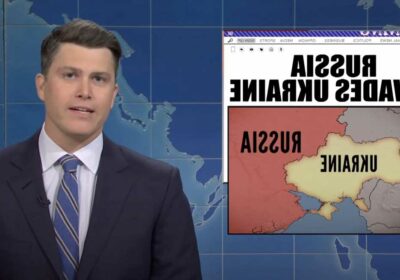 Saturday Night Live’s Weekend Update spent the majority of its segment discussing the biggest news of the week, Russia’s invasion of Ukraine.

“This week, Russia began their invasion of Ukraine. President Putin launched the attack with support from allies like Belarus and Tucker Carlson,” Colin Jost said.

“Experts on Russian politics were saying economic sanctions from the West won’t deter Putin because his money is in non-traditional assets that are difficult to trace. Ugh, so on top of everything else that is awful about Putin, he’s also into crypto.”

“After the invasion of Ukraine, the Russian stock market fell by 30 percent, to negative 90 percent,” Michael Che added.

Chasteness, Soda Pop, and Show Tunes: The Lost Story of the Young Americans and the Choircore Movement

'Silence of the Lambs': 'It Broke All the Rules'

“This is a tough subject to make jokes about. I mean, in my lifetime, I’ve seen footage of attacks like this on other countries, but never a white one… I am very impressed by all these Ukrainian citizens signing up to defend their country, even the famous ones. Imagine that here: If you ever read on the news that Michael Che has joined an American war, we have just lost that war.”

Weekend Update then noted that, early in the invasion, Russia managed to capture the site of the Chernobyl nuclear disaster in northern Ukraine, an area still impacted by radioactive materials.

“Said Ukrainians, ‘Oh no, don’t take that,’” Jost joked. “Capturing Chernobyl is like landing an audition for Harvey Weinstein now.”

(Earlier in the episode, SNL deviated from their usual cold open to have the Ukrainian Chorus Dumka of New York perform a prayer for the country still under siege. Weekend Update also eschewed from its usual quirky guest segments, instead delivering six minutes of headlines.)