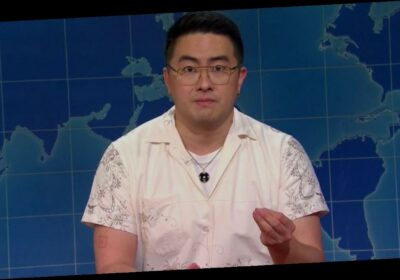 Bowen Yang delivered a powerful message addressing the rise in anti-Asian violence on Saturday Night Live. The comic joined Colin Jost for a segment on Weekend Update, and opened up about what people can do to help.

“Things for Asians in this country have been really bleak for the past two weeks,” Yang shared. “And all the weeks before that since forever. But there’s a lot of work to do.”

After sharing some joke suggestions about possible ways to help and places to donate, Yang got a bit more serious and explained why it’s so hard for him to talk about the attacks.

“What can I say to help how insanely bad things are?” he asked. “If someone’s personality is “Punch an Asian Grandma,” it’s not a dialogue. I have an Asian grandma, you want to punch her. There ain’t no common ground.”

“Look, I can’t address any of this without bringing up class or gender or imperialism. I don’t even want to be doing this Update piece. I wanted to do my character, gay Passover bunny,” he continued. “But it was too smart for this show.”

“I’m just a comedian. I don’t have the answers. But I’m not just looking for them online, I’m looking around me,” Yang added, before calling attention to the GoFundMe page for Xiao Zhen Xie, a 75-year-old woman who responded by returning with a punch of her own in self-defense.

“[The campaign] raised $900,000, which she immediately gave back to the community,” Yang said, getting emotional. “That’s where we are as Asians. Now come meet us there.”

Yang concluded by sharing a phrase in Mandarin that loosely translates to “fuel up.”

“I don’t know what’s helpful to say to everyone, but that’s what I say to myself. Fuel up. Do more,” Yang said. “It’s the year of the metal ox, which basically means a car. So everyone, get in, buckle up, it’s no pee breaks, we ride at dawn, grandma!”