Alex Moffat, who is best known for his portrayal of Eric Trump, succeeded Carrey in this weekend’s midseason finale. He joined Maya Rudolph’s Kamala Harris on stage and acknowledged that he looked a bit different.

“I’m like Colonel Sanders,” he explained. “Every time you see me, I’m a different guy. There’s a good chance this time next year, I’m going to be Mario Lopez.

“I just want to let the American people know one thing: You’re about to have a real leader again,” he continued. “And you’re going to have the most diverse cabinet in the history of American politics.” 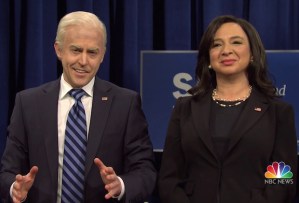 At that point, the Vice President-elect chimed in with her promise to the American populace. “I will make sure Joe never specifies what he means by ‘diverse,’” she said. “That is my Christmas present to you, America.”

What did you think of SNL‘s final cold open of 2020? Are you happy to see Alex Moffat replace Jim Carrey? Hit the comments with your reactions.