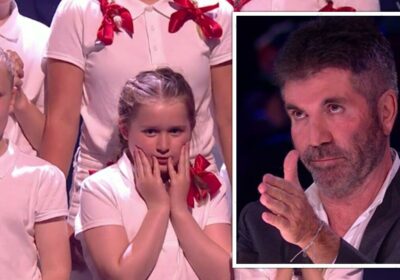 The Armed Forces Children Choir dazzled the Britain’s Got Talent judges and audience during their semi-final performance on ITV Tuesday evening. Following their emotional performance, Simon Cowell took a savage dig at “boring politicians” while sharing his critique of the choir.

The choir, which is made up of children whose parents are in the Armed Forces, was the second act to perform on Tuesday.

Judge Amanda Holden told the youngsters she thought their performance was one of the “most emotional and courageous” ones she had ever witnessed on the show.

Some of the children broke down in tears as they were singing and Simon was blown away by them.

“All of you were amazing,” Simon began following the choir’s moving performance.

“I think remembering that all of your mums and dads are in the Armed Forces, which is why this choir came together.”

He then took a swipe at the nation’s politicians, adding: “If you think about what’s happening in the world right now with the Jubilee, it’s so interesting isn’t it how a bunch of really talented kids can make a much stronger message than a bunch of boring politicians.”

The audience cheered Simon following his jibe at the Government and Amanda started clapping and nodding in agreement.

Simon continued: “And good for you because that was everything we would have wanted from you in the finals.

“I am so proud of all of you, congratulations. I loved the song as well by the way.”

Unfortunately, the choir missed out on their place in the final when hosts Ant McPartlin and Declan Donnelly announced the results at the end of the show.

The acts which secured a place in Sunday’s grand final were impressionist Ben Nickless and music duo Flintz and T4ylor.

They will be joining singer Maxwell Thorpe and ventriloquist Jamie Leahey in the final.

The other finalists are yet to be announced, but a total of 10 acts will be vying for the crown on Sunday evening.

They will compete to win a £250,000 prize and the opportunity to perform at the Royal Variety Performance.

Swarms of Britain’s Got Talent viewers flocked to Twitter to comment on Ben making it through to the final.

Laura Garside commented: “I love that Ben Nickless wasn’t even hyped up before tonight’s show. He was a massive outsider in the betting to get through tonight. It just shows that getting your performance absolutely right can change everything #bgt.”

Gem added: “Used my five free votes on #bennickless tonight on #BGT. So glad he got through.”

@JayStuartWilt commented: “He was amazing and truly the best act tonight. #BGT.”

After Amber and the Dancing Collies missed out on a place in the final, Sally added: “The correct two acts went through but I’m disappointed for Amber and the dogs #BGT.”

Britain’s Got Talent continues on Wednesday at 8pm on ITV.