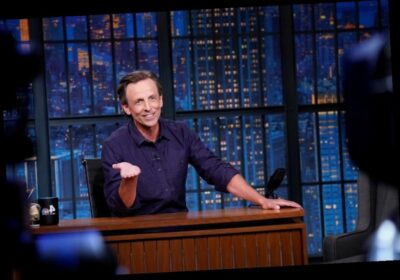 Seth Meyers, the host of NBC’s Late Night, has called for Donald Trump’s immediate removal from office after his supporters staged a siege on the U.S. Capitol on Wednesday, resulting in the deaths of four people.

In a sober opening monologue, Meyers said he wanted to offer a “clear-eyed” and “plainspoken” assessment of events in Washington D.C., which he stressed were “incited, directed, and encouraged” by the president as his four-year stint in the White House draws to an end.

“What we saw today was a violent insurgency and attempt to overthrow the legitimately elected government of the United States,” Meyers told his viewers. “As we were all watching these stunning scenes of violence, and sedition, and insurrection against our democracy, anxiously hoping for a restoration of calm and order, the president of the United States told the traitors and the mob, ‘We love you, you’re very special, I know how you feel.’”

Meyers called on lawmakers to act swiftly to remove Trump now, even though he only has 13 days left as president. He explained: “The only way our democracy is going to survive this harrowing moment is if he’s immediately removed from office by either the cabinet or the Congress and prosecuted. Anything less is tacit permission to continue to use his office, and his influence after he leaves office, to foment sedition and dismantle democracy.”

Meyers also suggested that Trump’s Republican backers should face the same consequences following a day of violence. He added: “Multi-racial, pluralistic democracy is fragile and precious, and it requires our vigilant stewardship and protection. Anyone not willing to forward that project, with the fullness of their effort, must be shamed and disgraced and removed from office. And that must start immediately with Donald Trump.”

Meyers was not alone in his condemnation of the day’s events. Late-night hosts were united in their shock and anger. Stephen Colbert called it a “horrifying day that will go down in U.S. history,” while James Corden summed it up like this: “Today was [Trump’s] last dance at the worst party any of us have ever been to.”