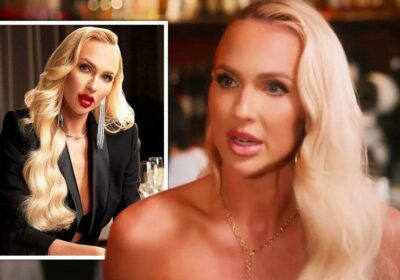 Real estate agent and reality star Christine Quinn was at the centre of several shocking moments in the fifth season of Selling Sunset which turned her against her Oppenheim Group colleagues. After getting in trouble for allegedly bribing a rival client and announcing her own company on Instagram, sources have confirmed Christine won’t be returning to the Netflix series next season.

Christine, 33, has reportedly made the decision herself to step down from the world-famous luxury real estate company.

Her bio and work history have since been cut from the Oppenheim Group’s website, although her picture is currently still on display.

The Selling Sunset shocker comes after her co-star Emma Hernan claimed Christine had offered a $5,000 bribe to steal one of her clients.

However, Christine denied the accusations, tweeting before season five dropped: “30 minutes till the launch of #SellingSunset. Enjoy the new season and all of it’s [sic] 5,000 fake storylines!”

Sources close to Christine have now told US Weekly: “It was Christine’s decision to leave the Oppenheim Group.”

Last week, Christine promoted her new solo project, RealOpen.com, suggesting she was already starting to distance her career away from her Oppenheim peers.

In her latest Instagram post, she announced: “Why work for someone else when you can be your own CEO?

“It took over a year of hard work and tenacity to create this platform and patent-pending technology to revolutionise the housing market.

“My Boss B***h manifesto is don’t STOP until you are the Boss of your own life. YOU and only you control your storyline. It was a moon shot, and now it’s a reality. Crypto is the new global financial system. Why ride the wave, when you can help create it.

“We work with buyers, sellers, and agents. Don’t get left behind…”

The reality star has also launched her own self-help book, How To Be A Boss B***h, which she’ll be touring across the United States over the next month.

Her representatives said the ex-Oppenheimer had tested positive for Covid, although co-star Mary Fitzgerald was sceptical.

A statement for Christine read: “Christine tested positive for Covid and out of an abundance of caution for the cast and crew, she did not attend the reunion.

“Producers offered her the opportunity to video chat, but she declined because she wasn’t feeling well enough to do it.”

Although Christine missed out on the reunion, her co-star Amanza Smith also tested positive and was able to make a virtual appearance.

When asked if she was convinced by Christine’s excuse, Mary recalled: “No. I mean, me personally? No, because we all tested on Tuesday and then again on Friday.”

Moreover, fellow colleague Chrishell Stause called out Christine when she was spotted on a film set with Real Housewives Of New Jersey star Melissa Gorga.

The unpredictable reality series hasn’t been officially renewed yet, but a sixth season is all but guaranteed after becoming one of Netflix’s biggest international hits.

Selling Sunset seasons 1-5 are available to stream on Netflix.