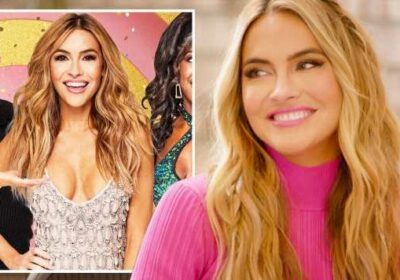 Chrishell Stause was at the centre of one of Selling Sunset season five’s most talked about storylines – her romance with boss Jason Oppenheim. However, in heartbreaking scenes, the two called time on their relationship and by the time the finale rolled around, Netflix viewers watched a tearful Chrishell contemplate her future at the Oppenheim Group. And while there’s been no confirmation that Chrishell has left the company or the series after the split, she’s wasted no time in lining up a new role by signing up to take part in ITV’s Celebrity Karaoke Club.

And she’s not the only instantly recognisable face in the line-up, with Strictly Come Dancing star Karim Zeroual also signed up.

Elsewhere, Love Island stars Laura Anderson and Kaz Kamwi will take to the mic, while Drag Superstar A’Whora and actress and writer Donna Preston will also show off their vocal skills.

TOWIE stalwarts Chloe Sims and Bobby Norris are two of the other celebs hoping to impress while reality star and Ibiza Weekender rep Callum Izzard has signed up.

Chrishell is no stranger to reality TV having starred in Selling Sunset for five seasons and also taking part in Dancing with the Stars.

However, this does mark her first foray into the world of UK TV since becoming a household name thanks to Selling Sunset’s launch in 2019.

Director of Reality Commissioning at ITV, Paul Mortimer, said of Chrishell and the line-up: “It’s great to have Karaoke Club back with another line-up of ITV2-friendly faces.

“Our younger audience will have this, plus much more entertainment, to look forward to on the channel and ITV Hub this summer.”

And Will Macdonald, Monkey’s Creative Director and Executive Producer echoed: “More irresistible than a wheelbarrow full of puppies, Karaoke Club is back, full of unrestrained joy, unfettered singing and unfiltered bathroom chat.

“This time, bringing American glamour and keeping it real (estate) is Selling Sunset’s fabulous Chrishell who will bring Hollywood to Borehamwood and show her British reality peers how to have a good time.

“It shouldn’t be too hard a sell for her,” he quipped at the end of his statement.

Chrishell’s stint on the ITV show shouldn’t be taken as confirmation that she doesn’t have a future on Selling Sunset but in the final episode of season five, it’s safe to say it was an issue she was contemplating.

Jason and Chrishell’s romance came to an end as the pair disagreed about having children.

While Chrishell was keen to start a family, Jason admitted he wasn’t ready for such a commitment.

Chrishell confided in co-star Emma Hernan in the season five finale about the split: “We are done, we broke up.”

The Selling Sunset star then burst into tears as she contemplated the idea she may never have children.

Emma tried to reassure Chrishell that she needn’t give up hope, but Chrishell struggled to compose herself as she admitted it was a “lot to process”.

Chrishell then dropped the bombshell: “I do need space to help myself detach. This sucks. I don’t know if we can keep working together anymore.”

Selling Sunset seasons 1-5 are available to stream on Netflix now.