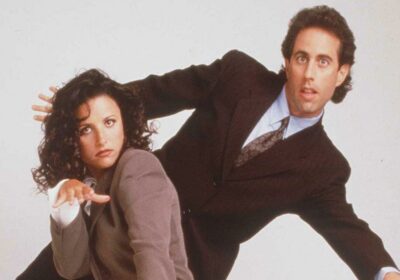 Get OUT! All 180 episodes of Seinfeld are coming to Netflix. The show, which stars Jerry Seinfeld, Julia Louis-Dreyfus, Jason Alexander, and Michael Richards, will appear on the streaming service starting Oct. 1.

The show ran for nine seasons on NBC through the majority of the ’90s and was created by star Seinfeld and comedian Larry David. Lovingly dubbed “the show about nothing,” Seinfeld won 10 Emmy awards throughout its run and become a key part of the cultural zeitgeist.

In its announcement on Wednesday, Netflix jokingly revealed that the “new(ish) comedy” would include a shocking “nine-season premiere.”

“This is the first time we’ve taken a risk of this nature, going all in on nine seasons at the jump,” Netflix Co-CEO Ted Sarandos quipped in a statement. “But Jerry has created something special with this sitcom that nobody has ever done. I truly think he and Mr. David have enormous futures ahead of them and I’m thrilled Netflix could be the home for them to grow their fanbases.”

Seinfeld also poked fun at the decision, saying in a statement, “Larry and I are enormously grateful to Netflix for taking this chance on us. It takes a lot of guts to trust two schmucks who literally had zero experience in television when we made this thing. We really got carried away, I guess. I didn’t realize we made so many of them. Hope to recoup god knows how many millions it must have taken to do. But worth all the work if people like it. Crazy project.”

Prior to “premiering” on Netflix, Seinfeld episodes were being streamed on Hulu since 2015.