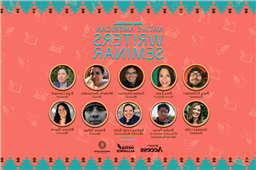 “We are proud to continue this incredible program expanding it to ten new fantastic Native American writers,” said Cara Jade Myers, director of outreach for the Native American Media Alliance. “The seminar provides a great access point for our growing development pipeline and will give our writers new opportunities to make headway into their writing career.”

All participants chosen for the seminar will workshop an existing script with creative executives from Skydance Media and Powderkeg Media as well as established writers on current series from CBS, ABC and HBOMax. The program provides intensive devel-opment workshops and is accompanied by rigorous writing sessions.

“Our film office is proud to continue working alongside great organizations such as NAMA and Warner Bros. in our shared endeavor to expand Native representation and authentic content throughout television and film,” said Jennifer Loren, director of Chero-kee Nation Film Office and Original Content. “We are excited to welcome each of the fellows in this year’s cohort of the Native American Writers Seminar.”

In addition, the seminar will provide representatives from prestigious fellowships and past participants of Native American Media Alliance writing programs. These speakers will share insight into career development, professional growth and new writing opportunities.

Rory Crittenden (Cherokee) is a filmmaker from the Peavine community of the Chero-kee Nation. He is a writer, director, and a Heartland Emmy-winning producer. From 2018 to 2021 Rory produced stories for four seasons of his tribe’s documentary televi-sion program Osiyo, Voices of the Cherokee People. He currently works as a freelance filmmaker, helping to create content for various Native American governments, television programs and community organizations. Rory lives in Tulsa with his wife Christy and their two children.

Gina East (Isleta Pueblo) is a writer and filmmaker living in Los Angeles. Her most re-cent writing and directing project was the short film, In the Witching House, that premiered at the Los Angeles Women’s International Film Festival. Her theater background and dance skills informed her unique artistry while directing the original Rock Opera, Orpheus: A Season in Hell. She is currently finishing the screenplay, What the Crows Saw, which explores the impact of family separation due to the Indian Adoption Project. Her story telling often focuses on broad themes distilled down to a single character’s experience. She’s the mother of two teenage daughters who are getting ready to leave the nest.

Joshua Emerson (Navajo) is a comedian, writer, and actor, based in Denver, Colorado. He is a founding member of the award-winning comedy troupe and production company, Dead-Room Comedy. Comedy shows that Joshua produces through DeadRoom Comedy include ‘Colorado Native,’ a Native American Comedy Showcase, and ‘Dead Inside,’ winner of the Denver Fringe Festivals Audience Choice Award for Best Comedy Show. In 2021, Joshua along with the rest of DeadRoom Comedy, produced a weekly video sketch for the entire year. All fifty-two sketches can be found on DeadRooms YouTube. Joshua performs stand-up for audiences around the country including at the Four Corners Comedy Festival, the Savage Henry Comedy Festival, the Black Hills Comedy Festival and at his home club, Comedy Works, in downtown Denver. Joshua has a degree in Economics from Fort Lewis College and serves as the Co-Chair for the Denver American Indian Commission for the City of Denver. He lives at home with his partner, Rachel, and his dog, Lola.

Michelle Hernandez (Wiyot) is a Native American and Latina filmmaker. She grew up on the Table Bluff Reservation, where she found her love for filmmaking. She has a Masters in Film and Electronic Media at American University in Washington, D.C. and a B.A. at Humboldt State in both Film and Native American Studies. Much of her work focuses on the importance of culture, traditions, and identity, as well as dealing with indigenous subjects. With her work she gives voice to stories that aren’t often told. She is the co-founder of Sugarbush Hill Productions, which she currently runs with her partner, Richie Wenzler. Her latest works include Douk and The Bartow Project.

Kyle Leonard (Navajo) has worked with ABC/Disney and FOX Studios as a freelance producer, creating projects for their respective diversity divisions. He produced eight different short productions along with various works for the studios. The greatest of these films that Kyle produced was for ABC, featured a full union crew and was shot on Panavision cameras with FujiFilm short ends. He began writing and pinpointing his own screenplays and completed a short production of the film, Three Bullets. Kyle focused on his writing from this moment forward and did garner some praise. In addition to placing in the Nichol Fellowship’s 20th percentile, Kyle was a finalist in two screenwriting competitions. He also began working on a development project with a producer from Oscar winning Benaroya Pictures. This opportunity led him to work on a treatment for a noted producer at Tomorrow Films. Kyle is originally from Scottsdale, Arizona, but has lived in Los Angeles and New York City. When he is not writing, Kyle enjoys watching baseball and football. Maître d’ is his first novel and stems from the inspiration of his time worked at The Mark Hotel on New York’s Upper East Side. Knuckleball, the submitted screenplay, is a visit to his favorite genre: Noir.

Vanessa Lillie (Cherokee Nation of Oklahoma) is the bestselling author of the debut thriller, Little Voices, which received starred reviews from Publishers Weekly and Library Journal as well as must-read lists in Real Simple, Refinery29, and Cosmopolitan UK, and was named one of the best debut thrillers by Bolo Books. Her second thriller, For the Best, was featured in the Boston Globe, Providence Journal and was an Amazon bestseller. She created and co-authored the number one bestselling Audible Original Young Rich Widows, a campy and fun “First Wives Club with murder” series set in 1985 Providence, Rhode Island. Originally from Miami, Oklahoma, she lives in Providence with her husband and sloth-obsessed son. She is working on an adaptation of her next novel that will launch a new crime fiction series centered on the stories of Missing and Murdered Indigenous Women and Girls. Lillie is a board member of Sisters in Crime and wrote a weekly column for the Providence Journal about her experiences during the first year of the pandemic. She hosts a weekly Instagram Live show, ‘Twas the Night Before Book Launch, where she chats with authors the night before their book is out in the world.

Stefan Perez (Federated Indians of Graton Rancheria) Stefan Perez is a Native American, Latino filmmaker based in Petaluma, California. His small videography business keeps him busy while his filmmaking collective, Flat Quack Films, keeps him busier. Stefan’s original plan of becoming an actor ended when he discovered the power of filmmaking during an acting class assignment in high school. The audience reception to his first short film about an action hero homeless man teaming up with a prostitute to take down the mafia was overwhelmingly positive. School administration was less than enthusiastic about the film and banned it from playing it in the school film festival. How-ever, the experience did not deter Stefan from exploring a whole new world outside of just acting. Stefan’s fascination with comedy writing and filmmaking was enough to start a life of endless toil in editing rooms and sleepless nights on set for years to come. Stefan’s style of comedy writing is influenced from the farcical wit of Mel Brooks and the campy extremism of John Waters, all wrapped together in a proudly low budget style. The indigenous history of storytelling is something Stefan takes great pride in. For a people whose history is tinged with tragedy, Stefan believes the only way to grow as a culture is to also expand into humor.

Sydney Leigh Soliz (Mashpee Wampanoag) is a descendant of the tribe who first dis-covered the Pilgrims in Plymouth, Massachusetts. Sydney wrote her first screenplay “Vince and Guy” as a result of a tragic incident that disrupted the lives of Native Americans in Mashpee. “Vince and Guy” gained her acceptance into the American Film Institute (AFI) where she was awarded a First Americans in the Arts Scholarship and eventually led to her acceptance into the Sundance Screenwriter Lab. At Sundance, Sydney was mentored by Hollywood’s foremost talented screenwriters and creative advisors including Academy Award nominated Stewart Stern who wrote “Rebel Without A Cause”. She would later act as a story consultant and interviewer on Stern’s life and career.

Steven Tallas (Navajo) Steven Tallas is an Award-Winning Filmmaker known for his debut feature film, 2019’s Rez Dogs. Growing up, Steven wanted nothing more than to see someone like himself starring in the movies he enjoyed most. With his penchant for storytelling and love of cinema, it’s no surprise that he found his calling in filmmaking. He began creating films as a teenager, learning from online resources and his experiences as an extra on film sets throughout the New Mexico and Arizona. Paired with his passion for sharing his heritage, Steven uses filmmaking to create opportunities for fair representation of the Navajo Nation in art and media. His goal is to share the stories and the history of Native Americans that Hollywood has often overlooked. Through his work, Steven also hopes to create films with messages and characters that younger generations can identify with, films that he hopes will make his younger self proud. Visit StevenTallas.com to learn more about his projects today.

Rhiana Yazzie (Navajo) Rhiana Yazzie is a 2021 Lanford Wilson and 2020 Steinberg Award winning playwright, a director, a filmmaker, and the Artistic Director of New Native Theatre, which she started in 2009 as a response to the lack of connection and pro-fessional opportunities between Twin Cities theaters and the Native community. A Navajo Nation citizen (Ta’neeszahnii bashishchiin dóó Táchii’nii dashinalí), she’s seen her plays on stages from Alaska to Mexico including in Carnegie Hall’s collaboration with American Indian Community House & Eagle Project. She has a new co-commissioned play in the works with Long Wharf Theatre and Rattlestick Theater and is currently developing her newest play, Nancy, a Native bio-perspective on Nancy Reagan, a sequel to Queen Cleopatre and Princess Pocahontas (commissioned by Oregon Shakespeare Festival and Public Theater). Her first feature film, A Winter Love, (writer/dir/prod/actor) will premiere at festivals in 2021/22. She is a graduate of the University of Southern California’s Masters of Professional Writing where she produced events featuring Stephen Hawking, Herbie Hancock, and Spalding Gray. Rhiana is working on her second feature film, Wounspe Wankatya: A College Education, this project in development was invited to the 2021 Sundance Producers Summit and won the 2021/22 Jerome Foundation’s Production grant.

The mission of the Cherokee Nation Film Office is to increase the presence of Native Americans in every level of the film and television industries, while creating opportunities for economic development and jobs in the Cherokee Nation.