Sean Lock life story: The 4 bizarre jobs comedian had before taking to the stage 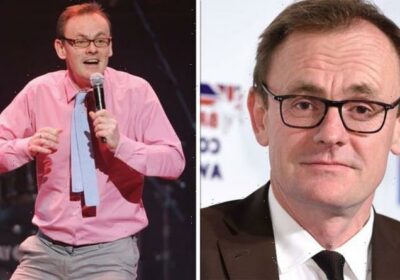 Sean Lock fans were heartbroken to hear the 8 out of 10 Cats star died following a battle with cancer on August 18. The 58-year-old was a Channel 4 hero and tributes were paid by some of his co-stars including Jimmy Carr and Jon Richardson. Fans may be interested to hear he took on a wide range of roles before making a name for himself as a comedian.

The 5 bizarre jobs comedian had

Sean Lock left school in 1981 and afterwards, his father Sidney got him a job as a labourer.

He would spend his days stripping concrete panels off buildings, and he worked as a labourer for seven years.

Lock revisited this career path after enrolling at the Drama Centre London and realising he had made a mistake.

“At the time I was earning £35 a day concreting floors. It didn’t take much thinking to persuade myself it was better to earn a living telling jokes in a warm pub than out on an icy building site.”

Following his time as a labourer, he travelled the world, taking on different jobs.

He spent six weeks working at a French farm as a goat herder, before moving on to a kibbutz in Israel.

A kibbutz is an agricultural community and the first one was established in 1909.

Fans remembered the star’s eclectic working life in their tributes, with one saying on Twitter: “Here’s to #SeanLock, a great comedian and a fantastic goat herder!”

He would not start his career as a comedian until 1993 when he joined the series Newman and Baddiel in Pieces.

During the same period he spent travelling the world, he worked as a toilet cleaner.

Back in 2010, he made a joke about being banned from his local pub by going into the wrong toilet.

He said: “It’s called The White Hart and instead of ladies and gents it’s got two pictures of a deer up.

“Underneath it says hinds and bucks, and when I went up there I wasn’t sure, am I a hind or a buck?

One of his last jobs before enrolling at drama school was at the Department of Health and Social Security.

His first interest in comedy developed when he started watching comedy club performances.

He visited some comedy shows in London and started taking up open-mic spots as a hobby.

From there on in, he realised he could pursue a career as a comedian.

Lock was married to his wife Anoushka Nara Giltsoff and they had three children together.

The comedian was diagnosed with skin cancer during his time as a labourer, due to overexposure to the sun.

He made a full recovery after seeing a dermatologist at Guy’s Hospital in London.

He previously told The Daily Mail he had a melanoma on his back, saying: “I had no idea how long it had been there.

“It didn’t hurt or itch, so there was nothing that would have drawn my attention to it. And being in the small of my back, it was not something you could easily see while looking in a mirror.”