Home » TV & Movies » Screen Talk Live: Studios and Indies Face a Daunting Future, But Here Are Some Signs of Hope

Screen Talk Live: Studios and Indies Face a Daunting Future, But Here Are Some Signs of Hope 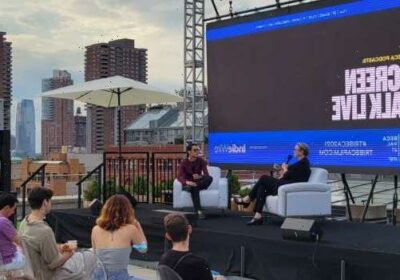 A year ago, the future of moviegoing — and crowded gatherings in general — was a big open question. That remains the case today, but the climate has certainly shifted, as movies are returning to theaters and actual live film festival experiences have crept back into existence. And so has the opportunity for IndieWire’s Screen Talk podcast to hold live editions. This week, hosts Eric Kohn and Anne Thompson gathered in front of an audience on the rooftop of Spring Studios in downtown Manhattan for a special recording of this week’s episode as part of the 2021 Tribeca Festival. The episode gave them a chance to catch up on some stories surrounding new releases, from the box office troubles of “In the Heights” to the lack of theatrical presence for Pixar’s “Luca.” They also discussed the importance of film festivals for smaller films and fielded questions from the audience.

Listen to the full episode below.

Screen Talk is produced by Leonardo Adrian Garcia and available on Apple Podcasts, Stitcher, Spotify, and hosted by Megaphone. You can subscribe here or via RSS. Share your feedback with Thompson and Kohn on Twitter. Browse previous installments here, review the show on Apple Podcasts, and be sure to let us know if you’d like to hear the hosts address specific issues in upcoming editions of Screen Talk. Check out the rest of IndieWire’s podcasts on Apple Podcasts right here.