Home » TV & Movies » Sarah Paulson on Controversial ‘Impeachment’ Look: ‘Transforming Yourself Is One of the Joys of the Craft’

Sarah Paulson on Controversial ‘Impeachment’ Look: ‘Transforming Yourself Is One of the Joys of the Craft’

Actress Sarah Paulson is an Emmy winner already, winning in 2016 for her role as prosecutor Marcia Clark in “The People vs. O.J. Simpson.” While Paulson is nominated once again for playing a real-life person, her nomination for “Impeachment” was a surprise to her. It’s also a validation, with Paulson telling IndieWire via phone that “it is the work I am the most proud of, to date.”

Playing the infamous Linda Tripp, who blew the whistle on the affair between former President Bill Clinton and White House intern Monica Lewinsky, required Paulson to find a human entry point into a very controversial woman. It also required the actress to physically transform herself, complete with heavy prosthetics and a fat suit.

The aesthetic alone drew criticism, something Paulson admits she was “naïve” to going into the project. “I wish I had been more aware of thinking about all of that in a responsible way,” said Paulson. “Obviously, at the same time, you look at Sean Penn on “Gaslit” and you look at Gary Oldman as Winston Churchill, Christian Bale. Transforming yourself is one of the joys of the craft and I do think this tiny part of it gets complicated because there is a craft to acting; it isn’t just something people are doing for sport. That was complicated, but at the same time I learned a lot and it has certainly changed my thinking going forward.”

The actress went on to discuss why playing Linda Tripp felt so significant, especially considering the issues women are facing today, and the entertainment world to which she’s eager to return.

IndieWire: Was there an added significance to the Emmy nom considering where women are in the world today?

Sarah Paulson: Some of the response to the show, and to my portrayal of Linda—or of Linda, the character—speaks to some of that. A lot of it is this understanding that there’s a lot of hatred towards women. And when you’re playing a woman who is not a hero, and who does very complicated things, and behaves in ways that you, as a woman, might imagine you would not it’s very easy to dismiss her because she isn’t likable, and fuzzy; she isn’t warm. The response is a testament to people’s resistance to not being given a character [who] is easily sexualized, that is maternal. Putting Linda in the box of just “human being” is asking a lot of an audience. 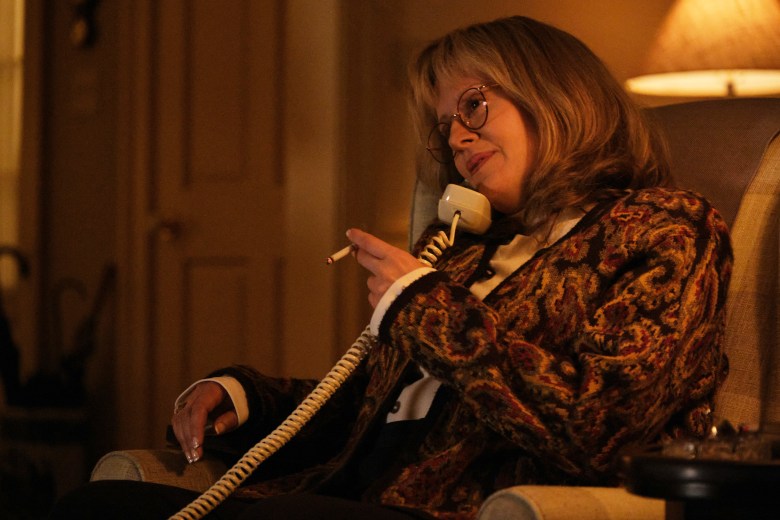 In comparison to your performance as Marcia Clark, what was your entry point to finding who Linda was, as a character, considering she isn’t as sympathetic?

Linda is perfectly easy to sympathize with as a person, her behavior or actions are interesting because there was a real impact on Monica Lewinsky’s life in a terribly negative way. That is a fact, and that’s not something that can be messed with or debunked, that is the truth. But with this character it was an interesting opportunity for me to figure out the why. With Marcia a lot of the things that were happening to Marcia were happening to her. She wasn’t the engine. Linda is the engine, the train that was heading straight towards Monica. She is responsible for making some choices that irrevocably changed a lot of lives and so, for me, I had to try to figure out what made Linda want to do that. What made her willing to do that? Because she’s a wonderful mother. She’s a wonderful friend to many people. She was good at her job.

What caused her to do something that, for most of us, is really head-scratching, and unfathomable, and hard to sit with? Everything I read, everything I watched, everything I listened to,  most significantly Sarah Burgess’s scripts, it was—easy is the wrong word—it all lends itself to an opportunity for me to come up with a why that I could get behind, that I could believe in, that I could let be my compass as I was portraying her. That was different than the Marcia of it all [which] was watching so much. There was so much documentation of the OJ trial, it was on every single day, the advent of the 24 hour news cycle.

That physical transformation was also very different from playing Marcia. What was that like to work with all the physical elements of the character?

When you have people you’re working with who are extraordinary artists like the people I was working with for my hair and my makeup—all of whom have been nominated for Emmys, which is just an incredible recognition—it’s so wonderful. I was able to really immerse myself inside this character because I looked in the mirror and I didn’t see me at all. That was totally thrilling. I worked with a dialect coach, Carla Meyer, who is wonderful, who works [with] Cate Blanchett a lot. That’s where I met her was on the set of “Mrs. America.” She worked with me and because of COVID we had to do a lot of stuff remotely.

Then I worked with a woman named Julia Crockett who helped me completely transform myself, physically, in terms of the way Linda walked, what her her posture was like, the way she used her hands to talk; she had pretty hands that she always had manicured. The way she would constantly toss her hair back. There were just a lot of physical, idiosyncratic behaviors of Linda’s that I incorporated, and I didn’t even use all of them because if I’d [have] used all of them the audience would have been like, “Jesus that’s really doing a lot.” I tried to pick some things that I thought would help evoke Linda as much as possible without being a facsimile.

Was it easy to put all those elements aside once the project was finished? The voice, the walk?

No, because I was doing “American Horror Story” at the same time. I played two characters on “American Horror Story” last season and one of them was Mamie Eisenhower towards the end. Every single time I had to stand up—Julia was with me on that as well—she was like, “Stop collapsing your chest.” I couldn’t get out of this Linda posture, much to my chiropractor’s chagrin. 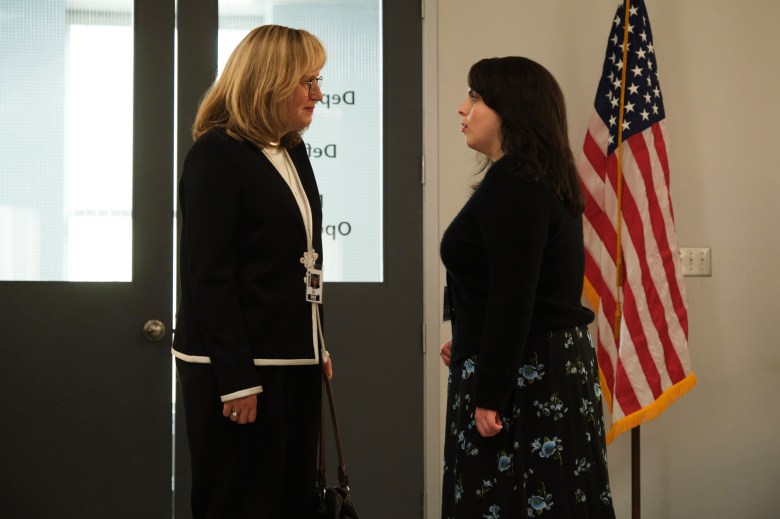 You’ve done nearly every genre between film and TV. What entices you to a project these days?

I’m looking for new. I’m looking for new experiences. I’m looking for collaborations with filmmakers and writers that are new to me. I’m just looking forward to having to doing things I’ve never done. Some of the Linda stuff was the beginning of that for me, of doing something that absolutely terrified me and that I wasn’t sure I could pull off. This nomination affirms that I could, and I did, and that feels extraordinary.

I’m very excited at this particular point in my working life to collaborate and be of service to whomever I’m working for, in terms of what their vision is of a story and letting go a little bit of my attachment to trying to be good, or that young person’s fantasy about being impressive and trying to prove what you’re capable of. I feel really excited right now to stand on my mark and try to give a performance that is desired. Whether it’s on stage or in a movie, or on television I just am excited to be of service which is a different way than I’ve ever thought about the work that I do.

Is there something you’d like to do that you haven’t done yet?

I haven’t been on stage in about a decade. That was how I started and was a very concentrated way of working, I’m a person who loves a regimen and a regular clock in/clock out, I love that. Going to the theater at the same time every day, and working with the same actors, and having an opportunity to tell the same story [so] by the time you come to the end of your three month, four month, six month run you have mined everything you can extract from a story, that’s thrilling.

You’re working on a horror film next, “Dust,” and you’ve done several horror films and TV projects. What is it about the horror genre that keeps you coming back?

What is really fun about working in that genre is you’re dealing with extremes. So you don’t have to be fearful or question the big swings that you might want to take as an actor because the genre can support it. That’s a really liberating, fun space to inhabit. I think they should have nominated the very brilliant James McAvoy for his performance in “Split” and Toni Collette as well.

“Impeachment” is streaming on Hulu.