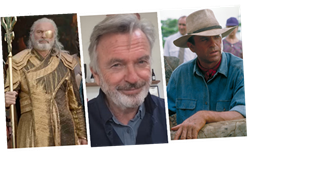 No great franchise is complete without Sam Neill. And if reprising his role as Dr. Alan Grant in the upcoming Jurassic World: Dominion weren’t enough, he also teased to ET a return to the Marvel cinematic universe in Thor: Love and Thunder.

After working with director Taika Waititi on Hunt for the Wilderpeople, Neill cameoed in 2017’s Thor: Ragnarok as an Asgardian actor playing Odin in a stage show. With recent reports that his scene partner, Matt Damon, would appear in Love and Thunder, Neill says there’s a good chance he’ll be joining, too.

“I think the odds are reasonably high,” he told ET’s Matt Cohen while promoting his new movie, Rams. “I think Taika’s got something up his sleeve. We will see what happens. Travel between [New Zealand] and Australia is problematic at the moment, but we will see if something can be worked out.”

In the meantime, Neill recently wrapped on the third Jurassic World film, which reunited him with his original Jurassic Park co-stars, Laura Dern and Jeff Goldblum. In Dominion, the trio were not only given the chance to revisit their now iconic characters but to have a say in where they would each be 20 years later.

“Colin Trevorrow, who’s a lovely guy and a really good director, he was very open to suggestions. Jeff would come to work with about 50 suggestions that drive us crazy every day, god bless him,” laughs Neill. “I love Jeff, but boy, does he have a lot of ideas! Laura and I would come up with things, as well, and Collin was very open to that. We’ll see how many of those things make it to the cut!”

Neill can next be seen in the comedy, Rams, about two estranged brothers, Colin (Neill) and Les (Michael Caton), who’ve fallen out over how best to run the family’s sheep farm. When tragedy befalls the prize ram from Les’ flock, the two will have to overcome their differences in order to save everything they love. (The movie is a reimagining of the 2015 Icelandic drama of the same name.)

“I have sheep of my own and so I’m comfortable around sheep and sheep seem to be reasonably comfortable with me,” Neill says. “There’s a scene in the film where I actually have to take a bath with my principle ram, and I wasn’t sure how that would go. But we had gotten to know each other pretty well by then so he was OK in the bath.”

Neill doesn’t just have any old sheep. He has a farm full of animals named in honor of his past co-stars: A bird named Kate Winslet, a pig named Taika. “I’ve got a red chicken called Bryce Dallas Howard, who hangs around my house quite a bit,” Neill says of his Jurassic World co-star. And yes, he has a sheep named Jeff Goldblum.

“I’ve got a ram called Jeff Goldblum, actually, who’s retired. He’s passed his youthful days,” he explains. “The reason I give my animals names is because you can’t in all conscious eat, you know, Helena Bonham Carter. They’re guaranteed a long and fruitful retirement. And Jeff Goldblum is just up on that hill over there and he’s enjoying a calm retirement. He no longer amuses the girls, he’s just grazing and enjoying himself.”

Rams is in theaters and available on demand on Feb. 5.