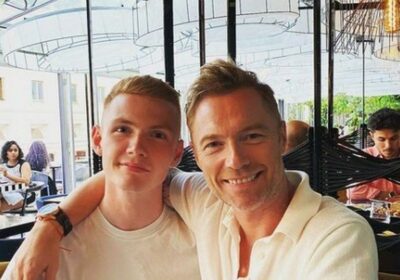 Ronan Keating has admitted that he was "nervous as hell" watching son Jack, 23, enter Love Island.

Jack, 23, entered Casa Amor on Sunday as one of six new male bombshells and it wasn't long until he name dropped his famous father to Gemma Owen, the daughter of Michael Owen.

Sharing his thoughts over his son's explosive arrival to the ITV2 villa, Ronan, 45, admitted that his "heart was beating out of his chest".

Speaking to MailOnline, the Boyzone star and Life Is A Rollercoaster hitmaker said: "I won't lie, I've been nervous as hell. When I saw him walk into the villa my heart was beating out of my chest.

"I'm excited for him though, this is something he wanted to do, and I'll always support him and all my kids in their endeavours

"The house is not the same without him and his little brother and sister are missing playing with him every day but we're tuning in every night to get our Jack fix and see where this adventure takes him."

Ronan shares Jack, as well as children Missy, 21, and Ali, 16, with ex-wife Yvonne Connolly. The singer also has children Cooper, five, and Coco, two, with wife Storm Keating, who he married in 2015.

It comes after Sunday night's episode showed Jack chatting to Gemma, the daughter of footballing legend Michael Owen, and while it took Gemma a while to reveal her famous family links, Jack wasted no time in mentioning his dad.

Speaking to the 19 year old brunette beauty, Jack discussed what interests his family has.

“My mum and my little sister are big into show jumping and everything like that. I know you’re big into it as well,” he revealed.

“Oh ok, oh wow!” said Gemma in response. “So your mum is a showjumper? So what does your dad do?”

Jack went on to say his dad’s a singer, to which Gemma asked if he’s well known.

“Yeah he is, you know Ronan Keating? That’s the old man,” he replied.

Speaking ahead of his entrance on the show, Jack said: "My dad is a singer, Ronan Keating. He will be watching when I’m on it for sure.”

Jack and Gemma aren’t the only famous kids to enter the villa over the years: they follow the likes of Dani Dyer and Curtis Pritchard.

Love Island continues every night at 9pm on ITV2.