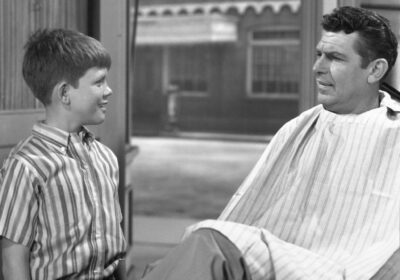 Even back when Oscar-winning director Ron Howard was known as young Ronny Howard, child actor of The Andy Griffith Show, there were signs that he was destined for something great. And his fellow, older cast mates could see it.

Among them was a Griffith Show actor who spoke the words that eventually came to fruition.

Howard said working with Griffith was an ‘insight into creativity’

The Splash director recalled his on-screen father Griffith as a generous mentor. He shared with Howard his insights on the ins and outs of a working set.

“He treated me really well, but he made it a learning experience, not in a stern, taskmaster kind of a way, but I was really allowed a real insight into creativity and how things work and why some scenes were funny and others weren’t,” Howard told PopEater. That insight has served me really well over the years. Andy was really kind to me, always playful and fun, but, by the same token, he wanted to get the work done.”

The ‘Griffith Show’ actor who saw potential in Howard

In a conversation with the Television Academy Foundation, the director revealed that a co-star on the rural television comedy remarked in passing that he would one day be a filmmaker.

“I remember Howard Morris directed some episodes,” Howard recalled. “In fact, I think he got nominated for an Emmy for an episode. Howard Morris played Ernest T. Bass in our show. Of course, he was a brilliant member of the Sid Caesar Comedy Hour, I believe, the Show of Shows.

“I remember him saying, ‘Oh, you’re going to be a director.’ Kind of joking, but you know, later on Lee Philips, another regular director of ours and Richard Crenna, [who] directed almost a whole season of shows for us, began to talk to me about it and I began asking questions.”

Howard was captivated by the director’s job

“It was fascinating to listen to people break down the script,” Howard said of his observations on the Griffith Show set. “Pretty early on, I noticed that almost all of our directors and certainly the ones that we all loved the most had been actors.”

Howard observed as well that his father, also an actor, was involved in directing. Eventually, the young actor realized he was “fascinated” by the far-reaching impact a director had on a set.

“My dad was still directing some theater,” Howard, who would go on to win a Best Director Oscar for 2001’s A Beautiful Mind, said. “So I saw that, too. I began to get a sense that it was all pretty fascinating. [I] liked playing with the camera and I liked talking to the actors, being a part of the scenes. I saw that the director was the one who was getting to play with everybody [and] began to be fascinated by that job.”