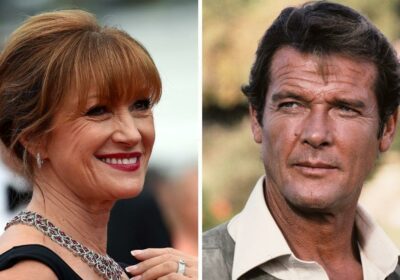 Shout at the Devil: Roger Moore stars in 1976 film trailer

Tonight, Sir Roger Moore returns to screen in his career-defining role as James Bond, with his debut as 007 in Live and Let Die airing at 8pm on ITV. The spy flick follows Bond as he investigates the deaths of three fellow British agents, which leads him on to the trail of the notorious New York drug baron known as Mr Big. His exploits see him travel across America and the Caribbean, where he ends up unearthing a terrifying voodoo cult, and a new mission to save the tarot-card reader Solitaire, played by Jane Seymour.

The 1973 film, based on Ian Fleming’s novel of the same name, was a huge commercial success, and saw Sir Paul McCartney nominated for an Oscar for his title theme tune.

It started a more-than-decade association with James Bond for Sir Roger, who would go on to star in seven 007 films in total.

The relationship of Bond and Solitaire in Live and Let Die is one of the film’s most enduring storylines, and off camera Moore and Seymour’s own union was further cemented after one hilarious incident on set.

Speaking to the Telegraph in 2017, she discussed how Moore would consistently make her laugh while filming.

This led to the pair having to stop filming and call in a pair of body doubles to fill in for them.

She said: “In one of the film’s final scenes, which takes place on a train, I had a truly terrible piece of dialogue and couldn’t get it out without laughing.

“Roger and I were both weeping, giggling like school children.

“The crew banished me from the set and we had to use body doubles to get it done.”

JUST IN: James Bond: James Brolin’s devastation of being dropped as 007 WATCH

Sir Roger was often known for his warm personality, which allowed those around him to feel at ease particularly when filming difficult scenes.

Seymour noted how he even did this with her when the pair were engaged in an awkward set of shots.

She continued: “On the day of our bedroom scene, Roger and I were having lunch together when he suggested we should eat liver and onions.

“I thought he was joking until he ordered it to make sure it would be as unappealing as possible.

DON’T MISS:
James Bond movie almost had Jurassic Park actor instead of Dalton [INSIGHT]
Roger Moore named the ‘best’ Bond ever and his pick for the next Bond [LATEST]
Roger Moore’s ‘unusual’ generosity on Bond set and to Audrey Hepburn [ANALYSIS]

“I honestly didn’t know what to make of that but, as usual, he’d made me laugh.”

The star, who would go on to win two Golden Globes for her roles in Ease of Eden and Dr. Quinn Medicine Woman, said the scene was still “nerve-racking, embarrassing and not at all sexy”.

She did admit, however, Sir Roger was a “polite kisser” though “we didn’t have any terribly steamy scenes”.

A BBC obituary from 2017 noted how Moore felt disappointed that heroes in films often had guns, including his own character Bond.

Other accounts show how he struggled to shake off the Bond tag following his retirement from the role, though Moore once confessed he “didn’t regret” his time in the franchise.

He added: “I regret that sadly heroes, in general, are depicted with guns in their hands, and to tell the truth I have always hated guns and what they represent.”

Moore also described how on the set for 1974’s Bond film The Man with the Golden Gun, director Guy Hamilton begged the Londoner to be more brutal in his character.

In his book, Moore continued: “That sort of characterisation didn’t sit well with me.

“I suggested my Bond would have charmed the information out of her by bedding her first.

“My Bond was a lover and a giggler, but I went along with Guy.”

Live and Let Die airs from 8pm on ITV tonight.