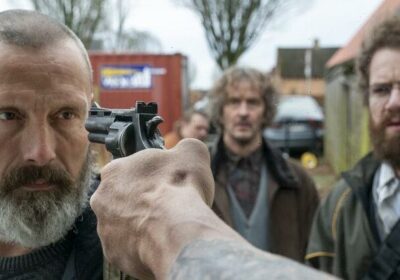 Mads Mikkelsen is…well, extremely mad in his latest Danish-language movie, Riders of Justice. The Another Round actor dons a bushy beard and a shaved head to play the latest middle-aged dad you don’t want to mess with, in a revenge thriller about a former soldier who seeks revenge for the death of his wife in a tragic train accident that may have been an act of sabotage. Watch the Riders of Justice trailer below.

Riders of Justice stars Mads Mikkelsen as a recently-deployed soldier who is forced to return home to care for his teenage daughter after his wife is killed in a train accident, which his daughter survived. But when another survivor of the train accident turns up on his doorstep with evidence that the entire thing might have been planned, Mikkelsen’s character embarks on a mission of revenge against the so-called “Riders of Justice,” the gang that had committed the act of sabotage that killed his wife and nearly killed his daughter.

Riders of Justice is written and directed by Anders Thomas Jensen, who Mikkelsen has previously collaborated with on the 2015 darkly humorous Men & Chicken. There’s a thread of dark humor in Riders of Justice too, as the group that assembles around Mikkelsen’s character are competent but woefully out of their depth to take on hardened criminals. But it’s a great showcase for Mikkelsen, who is just coming off a career-best performance in Another Round, which was recently nominated for Best International Feature at the Oscars and scored a Best Director nomination for Thomas Vinterberg. Mikkelsen has also recently joined the new Indiana Jones film from director James Mangold, opposite Harrison Ford and Phoebe Waller-Bridge. While Mikkelsen is presumably not doing a ballet-jazz dance number in Riders of Justice, it just shows how vast his range really is.

Here is the synopsis for Riders of Justice:

RIDERS OF JUSTICE follows recently-deployed Markus (Mads Mikkelsen), who is forced to return home to care for his teenage daughter after his wife is killed in a tragic train accident. But when a survivor of the wrecked train surfaces claiming foul play, Markus begins to suspect his wife was murdered and embarks on a revenge-fueled mission to find those responsible.

Riders of Justice opens in LA & NY theaters on May 14. It releases in theaters everywhere and On Demand May 21, 2021.