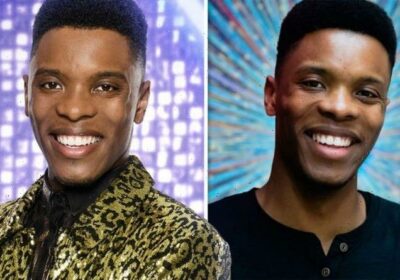 Strictly Come Dancing will be back with a bang on Saturday as the 15 celebrities discover which Ballroom and Latin dancers they’ll be partnered with. Although BBC viewers have yet to see how the contestants fare on the dance floor, Rhys Stephenson opened up to Express.co.uk and other press about his past dance experience and how confident he feels to strut his stuff.

Speaking about his previous dance experience, Rhys began: “I back myself I’ve got a good rhythm.

“I’ve always enjoyed dancing I’ve always had fun with it and in school I did street dancing.

“Learning a routine is not new to me but I haven’t done that kind of stuff in a little while.

“But I’m always ready to get in there and learn a routine and dance.”

“But all the time it’s always been on my own I’ve never really done a routine where I’ve had to hold someone or lift someone.

“I trust my partner as well that’s where my strength is going to come from.”

Rhys admitted he was looking forward to performing “serious” dances away from his role as a children’s presenter.

He said: “I really am looking forward to doing the serious stuff as well almost kind of putting that aside and showing them another side of me.”

“But to go Strictly and completely ignore that would be ridiculous, CBBC is where I came from and that’s my home at the moment, I obviously want to show that humour,” he continued.

“Humour is a big part of me I look forward to bringing the energy.

“That’s always been my biggest strength in presenting, bringing my energy and that’s what I’m gonna take with me onto the dance floor.”

Rhys addressed his newfound fame on Strictly and how this compares to being a CBBC presenter.

He shared: “It’s been exciting already from the announcement and everyone’s taken a bit of an interest into who I am.

“It is exciting but it is a bit daunting because I think the beauty of children’s television was you still had your privacy because it was mainly children who recognised you.

“When children recognise me it’s quite a really sweet moment – there’s times where a kid sees me and then you disappear or something else gets in the way.

“Once I was walking past some school children and one girl recognised me and I gave a little smile and disappeared into the crowd.”

“She was like, ‘Oh my gosh,’ you kind of get a little bit of magic behind you is really really nice,” he said.

“I’m getting used to the fact that instead of nine year olds recognising me now I’m going to get mums and dads and adults recognise me.

“Not because of their kids but because they might be a fan of what I’m doing and that’s really exciting it’s really nice.

“I love having conversation, I just love people so it’s all good to me.”

Strictly Come Dancing returns to BBC One on Saturday.