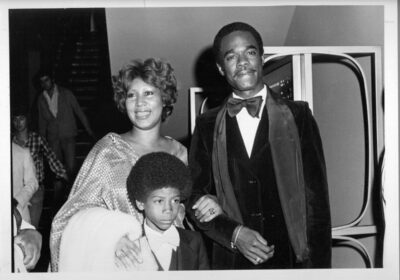 The new movie Respect tells the remarkable true story of music icon Aretha Franklin. The film not only recounts the singer’s journey to find her voice and become the Queen of Soul, it also depicts her relationship with her first husband, Ted White. But is that the only romance of hers featured in the film? Here’s what we know.

Aretha Franklin was married to Glynn Turman for six years

A few years after she divorced her first husband in 1969, Franklin met actor Glynn Turman backstage at a show in California.

According to the actor, he was there with his friend/ high school classmate Ben Vereen who was performing that night. When Vereen went into his dressing room to get ready, Turman began wandering around backstage, where he crossed paths with one of Franklin’s sons.

“There was a kid at the top of the stairs, young fella, and he says, ‘Glynn Turman! Oh my gosh, my mother just loves you,’” Turman recalled while appearing on the Bullseye with Jesse Thorne podcast in January 2021. “I said, ‘Who’s your mother kid?’ and he says ‘Aretha Franklin.’ So he takes me up to her dressing room and she’s standing in front of the mirror, the vanity mirror, in this beautiful white gown. She sees me in the mirror, the reflection, and she let out a little scream.”

It wasn’t long after that Franklin and Turman began dating. They were engaged in March of 1978 and tied the knot on April 11, 1978, at her father’s church.

Though things were great in the beginning, the couple’s marriage started falling apart after the singer’s father, Clarence LaVaughn “C. L.” Franklin, was shot in 1979 and in a coma until his passing in 1984. During that time, the hitmaker immersed herself into her career, leaving Turman on the backburner.

Franklin and Turman separated in 1982 and finalized their divorce two years later.

Franklin was one of the most iconic singers of all time, so it doesn’t come as a surprise that her life story has been made into a biopic.

The upcoming film Respect recounts the life of the Queen of Soul, from singing as a child at her father’s church to becoming a global superstar and civil rights activist. Though the movie will focus on Franklin’s journey to stardom and finding her voice through music, it will also recount aspects of her personal life, including her relationship with her first husband, Ted White.

As for her second marriage to Turman, it doesn’t seem like that will be a focal point in the movie. According to History vs. Hollywood, Respect will chronicle Franklin’s life up until 1972, around the time she recorded the highest-selling live gospel music album of all time, Amazing Grace.

If this is the case, Franklin’s marriage to Turman will not be depicted in the movie seeing as they married in 1978.

Although the film does not chronicle Franklin’s six-year marriage to Turman, it does depict her volatile and abusive relationship with White, whom she was married to from 1961-1969.

While viewers get a glimpse into the couple’s tumultuous marriage, Marlon Wayans, who plays White in the film, recently shared that the goal was never to paint Franklin’s ex as a “monster.”

“I hope Ted White sees the movie and is pleased by the way we handled his character, because we could have painted him as a monster,” the actor explained to Variety. “When you fall in love, people don’t see you fall in love, so it’s so easy for them to go, ‘You should leave that person.’ No, no, no, no, you need to see them fall in love and see why they’re there and see them trying to rescue each other from their damage.”

Wayans continued, “And then she gets big and his insecurities and his jealousy steps in and there goes the little boy attacking his woman because he just can’t handle it. So I think you just give them layers and approach it with a delicate touch.”