The 2020 Emmys are fully underway, and we just got to the biggest categories of the night. Surprising absolutely no one, Regina King just secured the award for Best Actress in a Limited Series or TV Movie.

If you binged HBO’s limited series slash continuation of the classic graphic novel, then Regina’s win comes as no surprise. Regina was nominated alongside stellar actors like Cate Blanchett (Mrs. America), Shira Haas, (Unorthodox), Octavia Spencer (Self Made), and Kerry Washington (Little Fires Everywhere). And Watchmen is nominated in seven more categories.

Taking her rightful place upon the metaphorical stage, Regina delivered an acceptance speech that honored the thespian community and late Supreme Court Justice Ruth Bader Ginsburg. She also encouraged everyone to head over to Ballotpedia.org to come up with a voting plan for the upcoming election. “Gotta vote,” she said. “I would be remiss not to mention that.” (BTW, here’s another handy guide for learning all about how to register to vote in your state.)

During her speech, Regina wore a hot pink suit and a T-shirt that serves as a reminder that the officers who killed Breonna Taylor (Jonathan Mattingly, Brett Hankison, and Myles Cosgrove) still haven’t been arrested or charged. 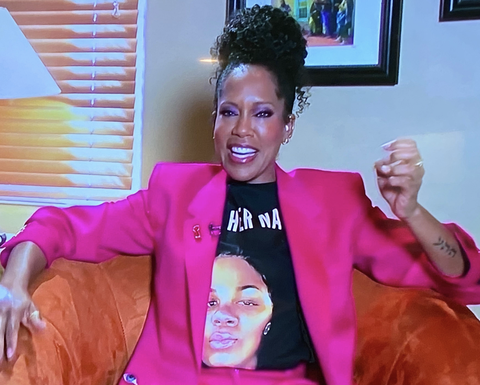 Regina’s resume continues to be one of the most impressive in Hollywood. When it comes to the Emmys, she already won the Best Supporting Actress category in 2015 and 2016 for American Crime and the Best Lead Actress category for Seven Seconds.