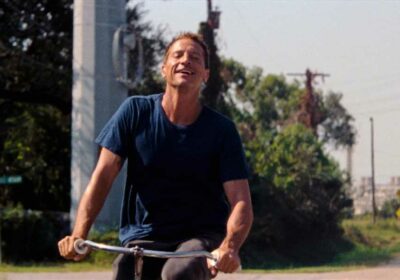 You guys remember Mikey Saber, right? The adult-film actor, blessed by God and genetics, star of The Fast and the Fury-Ass? 2000 movies, 13 AVN nominations, six awards (including Best Oral, which Mikey will tell you he more than earned, because, like, he was doing all the work)? Got 800 — almost 900 — subscribers on his Pornhub channel? Don’t worry, he’ll wait while you Google him. A native of South Texas, Mikey did the usual go-west-young-well-endowed-man thing, became a big deal in L.A., transitioned to managing stars, got chewed up and spit out. Now he’s showing up at his estranged wife Lexi’s place back in the Gulf Coast, fresh off a two-day bus trip and what looks like a bad beating, long story, he’ll tell you later. Our man is looking for a place to crash. Neither his spouse nor her mother want Mikey there. Mikey doesn’t care. Mikey has to put his life back together, and he’ll beg, borrow, steal, screw and charm anyone he needs to until he can figure out what comes next.

'Tangerine': Inside the Transgender Revenge Comedy of the Year

Spend some time in the company of Mr. M. Saber (née Davies), and you can see why writer-director Sean Baker called his new movie Red Rocket — besides, of course, the connotations to the physical attributes that made this hustler a celebrity in the first place. A sort of companion piece to Starlet, Baker’s 2012 porn-industry-adjacent drama, this character study essentially straps you into the passenger seat next to Mikey and launches itself recklessly into orbit. It also extends the filmmaker’s winning streak, starting with 2015’s Tangerine and 2017’s The Florida Project, while wallowing in the sort of glorious Amerindie aimlessness that’s become Baker’s specialty. No one has figured out how to seamlessly balance sweet and seedy the way that he has, or how to make you sympathize with folks you’d still cross the street to avoid in real life.

And trust us when we tell you that Saber is the sort of deluded, narcissistic, as-nasty-as-he-wants-to-be bro you normally wouldn’t want to be around. Biking around Texas City like a rangy 12-year-old, selling ratweed to refinery workers, regaling his twentysomething neighbor with mythic tales of raunch, this fuck-up is just a few steps above bottom-feeding. Only Baker could somehow make a Pilgrim’s Progress about a loser with a giant penis into a slightly goofy, cracked celebration of life on the fringes. He wants you to recognize that this guy is bad news, and also recognize yourself in him, even if it’s just a flicker. That’s the first of two sleight-of-hand tricks Baker is pulling here. Ah, Mikey! Ah, humanity!

But Red Rocket also has an ace in the hole when it comes to keeping you from outright recoiling every time Saber is on screen, and this is where the casting coup comes in. You guys remember Simon Rex, right? Male model, MTV VJ, millennial tabloid Romeo, hip-hop vulgarian prankster (big up Dirt Nasty)? Preternaturally handsome? The gentleman has lived more than a few lives, all of them hard. (He also has a tangential connection to the X-rated world thanks to a bad decision, made out of desperation, in his late teenage years.) There’s definitely a meta-aspect to watching this guy try to crawl his way back up at first, an almost uneasy frisson from seeing someone that’s actually suffered the slings and arrows of show business going through these motions.

Rex, however, knows how to play up the appeal of this former golden boy without winking to the audience or making you feel pity for him. Instead, he draws you in, backslapping viewers even as we shake our heads. His Saber is one part cute-but-always-pissing-on-the-floor puppy dog, one part carnival barker, and a whole lot of amiable sleaze. The way he plays against the cast of mostly first-timers and locals — another Baker specialty — feels completely in tune with the movie’s loose, let-it-flow vibe. Even the way Rex turns Mikey’s walk into a sort of ridiculous, rooster-with-a-hernia strut gives you a sense of who this guy thinks he is, as well as who he actually is. The director didn’t design the movie to be a showcase or a second-act resurrection for the 47-year-old actor, but damned if doesn’t double as a reintroduction. Or rather, an opportunity for a complete reassessment. Who knew that the guy singing on “My Dick” was capable of this kind of depth? Who knew that the star of the Scary Movie parody franchise had aged into being such a breezy yet soulful actor?

Then Saber, Lexi (Bree Elrod) and her mom (Brenda Deiss) walk into a donut shop, and he spots the 17-year-old redhead — she goes by Strawberry (Suzanna Son) — behind the counter. The look on his face suggests something has been awakened in him, and it ain’t good. Of course he’s going to go back later, and hit on her, and smoke those star-spangled joints with her, and gently start grooming this young, if not exactly innocent kid into possibly being his way back into the “industry.”

And the more you see that, despite the good looks and likable doofus vibe, you’ve been palling around with someone who is not a nice person underneath it all, the more that Red Rocket works its second magic trick on you. Baker has gone on record saying he didn’t want to make an explicitly political film, but it’s not a coincidence that this movie takes place in 2016, and that what initially seems like a guy who’s a joke isn’t exactly funny ha-ha, or a story about unlikely redemption starts to curdle into something a little darker. A new age is slouching awake, hungover on Viagra and Four Loko, and Saber is opportunistic and sociopathic enough for it. It’s to Baker and (especially) Rex’s credit that we dread what’s on deck in this diary of a Trump-era ex-porn star on the skids, and we still can’t wait to turn the page. The movie may want you to see the best of us in the dingiest of places. But you’re as delusional as Mikey Saber if you think it will avert its eyes from showing us the worst of us as well.