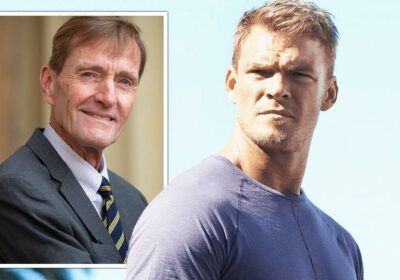 Replacing Tom Cruise as the iconic vigilante Jack Reacher, actor Alan Ritchson breathed new life into Lee Child’s creation in an action-packed new series for Amazon Prime Video. Reacher has already been renewed for a second season, but the author has suggested the series could continue for many more years to come.

Shortly after the first outing for Alan’s new take on the popular hero premiered in February, the streamer wasted no time giving the greenlight for a follow-up.

Season two will most likely take its story from the second book in Lee’s series, Die Trying.

However, speaking to Express.co.uk and other press, Lee admitted he’s still not quite sure what season two will look like when it hits screens in 2023.

“I’ve been in showbiz all my life in one way or another,” he explained. “And what you quickly learn is it’s not my decision.

“It’s not anyone’s decision except the viewer whether there’s going to be future seasons.”

Thankfully, Reacher became the most-streamed series during the first week of its release, the first Amazon project to do so.

Its popularity could very well sustain over multiple seasons, though there are well over 20 books in the series, with another planned to publish later this year.

Alan may be playing Reacher for over two decades if the series goes according to plan, but Amazon will have to wait to see how next year’s follow-up is received.

Lee continued: “If we find that there are, then we’ve got 23 or 24 other books to choose from by that point. I say let’s do them one at a time, until I’m a very old man!”

Series developer Nick Santora is also keen to stay with the series as long as the streaming service is willing to bring Reacher’s gripping cases to live-action.

He told Express.co.uk: “My view is as long as Lee wants to keep making all of these books, I’ll be happy.

“Because it means one of two things. Either I have a job for a long time, or if I don’t have a job I at least can watch them. And I like watching this stuff.”

Season two could feature the nomadic law-enforcer involved in a terrifying kidnapping if Die Trying forms the basis, but there could also be a possibility for the series to jump around Lee’s novels.

Nick continued: “As for doing it in order, there’s a lot of people involved in this project. There’s the studio, there’s the network, there’s producers, there’s Lee Child.

“And everything, in a good way, is a discussion. You have a lot of people who come together, we discuss how we want to approach things, how we’re going to handle things.

“The nice thing is Lee’s books are so well-written and they’re all so interesting, you could pick any one off the shelf blindly and turn them into an interesting storyline.”

“When you’ve got a series that people love, why not do a second season? Why not do a third?” Lee added in a Q&A.

“Why not do a 27th? By that time I’ll have written some more. It could go on forever, literally to the heat death of the universe.”

Thankfully, Lee is on board to help bring all his novels to screens, and there are even several short stories and novellas which could form the basis of supplementary seasons and spin-offs.

Reacher season 1 is available to stream on Amazon Prime Video.