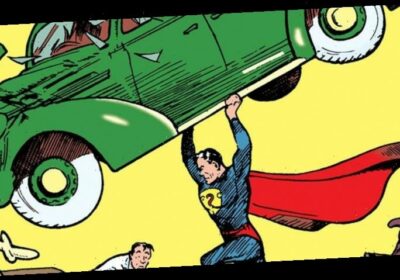 It’s a bird, it’s a plane, it’s a sky-high record set by an iconic Superman comic. The very first, in fact. In 1938, Action Comics #1 would change pop culture history, introducing the Man of Steel to the world. And now, a rare issue of Action Comics #1 has made its own mark on history, setting an all-time record for a comic book sale.

There are only a few existing copies of the comic book that introduced Superman to the world. And it just sold for a whopping $3.25 million. The Associated Press reports that an issue of Action Comics #1 set a new record when it sold for $3.25 million in a private sale, narrowly edging out the previous record set by another copy in 2014 for slightly over $3.2 million.

The sale was announced by ComicConnect.com, an online auction and consignment company. The 1938 comic “really is the beginning of the superhero genre,” said ComicConnect.com COO Vincent Zurzolo, who brokered the sale. Below is an image of the copy that sold for the record-breaking amount.

Action Comics #1 is widely regarded to be the “holy grail” of comic books, with few unrestored original copies believed to exist. The book’s first issue run in 1938 had a print run of just 200,000 copies and a cover price of just 10 cents. So it’s no surprise that one in as good condition as the one pictured above sold for as much as it did, making a nice profit for the seller of this issue, who bought the comic in 2018 for slightly more than $2 million.

Zurzolo said that it’s estimated only about 100 exist today, and in varying conditions. He said this copy is among the best-kept ones.

There’s no underselling of how seminal a comic this is. Action Comics #1 introduced the world to the very first modern superhero, in a story that detailed the origins of the alien hero, who came to Earth from another planet and forged a secret identity as newspaperman Clark Kent. It ushered in a new age for comics, with other heroes like Batman, Wonder Woman, and more following in his footsteps, and eventually paving the way for our superhero-dominated landscape we live in today. When you look at the overall impact that this comic had, it’s easy to see why it sold for a whopping $3.25 million.