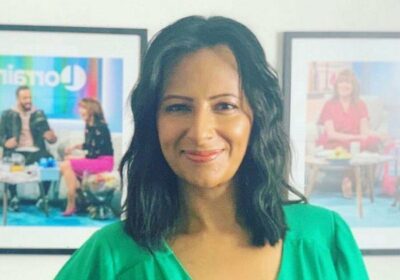 Ranvir Singh shared a tender-hearted image of the last gathering with four of her Good Morning Britain friends.

In the picture, the 43-year-old is nestled nicely in the middle as her co-stars Susanna Reid, Charlotte Hawkins, Kate Garraway and weather girl Laura Tobin all embraced one another as they smiled for the camera.

The nostalgic and warm image was taken six years ago on the pink carpet of Lorraine's High Street Fashion Awards in 2015 but Ranvir confirmed a reunion was long overdue.

It seemed as though the ITV political correspondent had felt a touch of sadness as she confirmed the fivesome had not been in the same room together for quite some time – due to the Covid-19 pandemic.

The TV star, who was missing her female colleagues, lovingly gushed over "how gorgeous" they all appeared.

Sharing the sweet post with her 112,000 followers, Lorraine Kelly's stand in host penned: "Aw look what popped up from six years ago!!

"The five of us haven't all been in the same room at the same time for so long !! Look at how gorgeous they are."

Soon after posting, Ranvir was met with tons of praise from online fans – with the post racking up 10,500 likes and hundreds of comments.

Notably Piers Morgan's former on-screen wife, did not seem to share the same passion for hugging as meteorologist Laura.

On a recent episode of GMB, Susanna left her temporary co-star Adil Ray completely hanging when he offered her a hug on the day restrictions had eased in the UK.

Susanna appeared incredibly uncomfortable as Adil approached her with his arms wide open.

In spite of being able to give and receive hugs freely, the 50-year-old star continued to give Adil the cold shoulder and rejected his gesture.

It was hard for viewers to watch the tense and awkward moment that left Susanna squirming in her seat.

Turning her nose up, she told Adil, she'd rather save her hugs for more "important people".

Adil approached Susanna, adding: "Let me just, come on! I haven't seen you in such a long time!"

Looking shifty, Susanna said: "What did Dr Hilary say? I am still in the mood for a virtual hug!"

Dr Hilary chirped in: "Lots of people are still nervous for a hug!"

Susanna explained: "Apologies, I am just protecting you first of all… who knows what I might have, but secondly if we ration hugs, you can hug more important people."