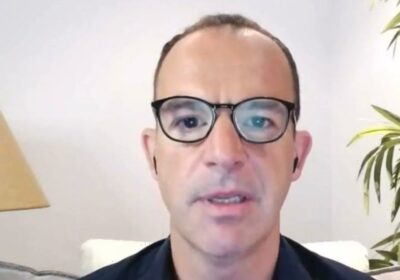 Martin Lewis appeared on Good Morning Britain on Wednesday to talk about the cost of living crisis.

The Money Saving expert appeared on Wednesday's edition of Good Morning Britain after shock figures have been released from analysts that have predicted energy bills will rise even higher than expected this winter.

Bills are now expected to reach approximately £3,582 per year for the average household from October – up from the £3,359 predicted earlier this month.

Martin Lewis has blasted the Conservative government, saying that "this is a national crisis on the scale of the pandemic".

The government claimed it is currently unable to introduce any immediate measures due to the leadership race between Rishi Sunak and Liz Truss.

The financial expert has labelled this excuse as "bull".

In Wednesday's interview, show host Charlotte Hawkins said to Martin: "The government are adamant that nothing can be done until the new PM comes in?"

Martin Lewis responded by saying: "What a load of bull, that's complete bull..

"This is a national crisis on the scale of the pandemic.

Martin called on the two leadership candidates, Liz Truss and Rishi Sunak, to reach an agreement of what will happen to avoid a "national crisis".

He said: "The idea they can't do anything is wrong. They are not willing to work together."

Mr Sunak has indicated in his pledges he plans to evaluate the cost of living payment, but Martin said this must be doubled to be in line with the new forecasts.

He said: "The gap between the current price gap and the average over October – March has doubled from where it was in May so we need to see a doubling of his amounts."

The finance guru also blasted Ms Truss' proposed pledges to cut taxes and suspend the green levy. He said: "This is a sticking plaster on a gaping wound. She needs to come out and give us tangible promises of what will happen now."

Viewers of the show have taken to Twitter to agree with the financial guru and have even called for him to take over running the country.

One person said: "Can we get Martin and Mick Lynch to run the country with immediate effect?"

Another wrote: "Martin Lewis rules! He should be PM!"

While a third penned: "Martin Lewis should be the next PM."

A fourth commented: "Thank you Martin for trying to help people like me with disabilities you should be PM I really do fear October."