Home » TV & Movies » Rachel True Wanted More for Rochelle in 'The Craft,' Too

Rachel True Wanted More for Rochelle in 'The Craft,' Too If there were ever a celebrity interview that called for me to fluff out my own ’fro, wear something witchy like a skeleton hand hair clip, and keep a rhodonite stone nearby as we talked tarot and esoterics, in October, it would be with ’90s OG Black witch Rachel True. The day we were scheduled to talk about True’s hybrid memoir and tarot book/deck True Heart Intuitive Tarot, she appeared on my TikTok For You Page in a video titled “Black Women Who are Most Likely Witches In Real Life” along with Cree Summer, Lisa Bonet, Erykah Badu, and Janelle Monae (you know, likely suspects). Algorithms be damned, this wasn’t chance, this was magic.

Most known from the 1996 hit The Craft as Rochelle, the lone Black witch in her coven, True’s legacy of roles have certified her as a leader to all quirky/weirdo/awkward/goofy Black girls. She popped up in every cult classic, from comedies CB4 and Half Baked to Gregg Araki’s Nowhere and Julie Dash’s Love Song. She even showed up in almost every iconic ’90s and early aughts sitcom, from The Cosby Show, The Fresh Prince of Bel-Air, Beverly Hills, 90210, Family Matters, and Dawson’s Creek to leading her own sitcom in 2002, Half & Half.

Now, True is holing up in her L.A. home with her two cats, waiting for the world to get back to some semblance of what we knew before. When she logged into Zoom to talk everything tarot, her thick New Yawk accent slipped out and we quickly fell into everything else from hair porosity, the misfortunes of being attracted to cis heterosexual men, and pinpointing the exact moment when Black representation on television disappeared. It felt like I drew the High Priestess card.

The True Heart Intuitive Tarot isn’t just another book by a celebrity—True wrote this herself, based on a lifetime of experience. She explains that the project started off as a script about tarot, and others suggested it should be flipped into a reality show, until it finally evolved into a hybrid memoir and tarot guide. Now, with True Heart Initiative out in the world, she’s ready to get back into acting. And while she won’t talk about the new reboot The Craft: Legacy, she’ll happily discuss her work in the 1996 version—including the more complicated parts. 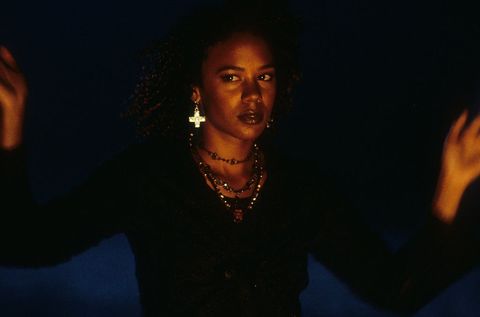 On its surface, the book is a guide to tarot, but it’s equal parts memoir, too. You share a lot of dark details about your relationship with your parents. How do you feel about that vulnerability being available for others to consume?

It’s weird. I didn’t give away all my family’s secrets. My sister read it and she said, “I think you let us off the hook, actually.” Some other family members didn’t feel the same way. The reason I was able to filet myself and put myself out there is because I know I’m not the only person [who’s gone through similar experiences]. I’m hoping people can see their reflection in the essays. Some of their good and bad—the high vibe and low vibe behavior. When we can see it and recognize it in other people, it helps us release some of the shame.

There’s been a sort of wave of enlightenment recently: Lots of Black people are venturing out of Christianity or exploring different spiritualities, tarot, manifesting, and other occult-like practices. Having been a vet in the community, how do you feel?

I think it’s tremendous. I can’t really speak on people that were raised in the church, because I was not. Cards to me are just paper. Half the images on those cards are Bible parables and stories—the Tower, The tower of Babel, the angel on the Temperance card. So tarot is certainly not out of line with Christ Consciousness. A religious friend of mine who wasn’t sure if she was going to open the book said, “Oh, it’s actually a way to clear out the anxiety to hear God’s voice a little clearer.”

With tarot, the magic isn’t in the cards. The magic is in what your mind feels and processes when you see the image from the card. My whole book is about learning how to do this yourself so you can get in touch with your intuition for your benefit.

We [Black Americans] had a long rich tradition that was beaten out of us, and Christianity was placed on top of us. I’m not knocking it. To me, a perfect melding would be a little bit of both. Seeing what gave our ancestors strength and what made them feel connected to Spirit and combining it. Anything that I can utilize, whether it is church, tarot cards, or therapy to get closer to what my soul work is, I’m going to try it out. I hope more Black people explore.

“Imagine if [Rochelle] had been around a bunch of Black witches.”

The Craft: Legacy is coming out, and re-watching the original left me conflicted. I loved the movies for the representation, but it seemed like each witch had a conflict, and Rochelle’s conflict was…race? She didn’t abuse her powers like Nancy or Bonnie, but she was vilified for not empathizing with a racist who terrorized her.

I don’t disagree. But I love perspective. When I was cast in that movie, I did think, “Bonnie is burned, Nancy is crazy, Sarah is suicidal. I’m…Black?” Young me thought, “Do the producers and Americans think Blackness in itself is a problem?” Now, my perspective has shifted. Thank God they had a racism storyline in there. The fact that this middle-class Black chick was dealing with that was a very valid storyline. But I wish she had parents, and I wish it had been explored more.

It was very hard to shoot the end [in which Rochelle loses her powers], because I was like, Rochelle is more powerful than this. Rochelle wouldn’t need to go crawling back. [Imagine] Rochelle as a natural witch who could have blown them all away with her powers. Imagine if she had been around a bunch of Black witches. Imagine how powerful Rochelle would have been.

[If that was the story], they don’t have a movie, and with four girls, show all their families except the one Black family. They don’t have a publicity junket and exclude the one Black character, like was done at the time. I don’t think my white co-stars understood. I know they thought, “You’re not as famous as us, that’s why.”

I’m speaking out about it today because I don’t think a lot of white actors understand that we were not included in the publicity machine, which means we got less pay and we didn’t get to be in front of directors, which meant it was harder to build Black celebrities. It was not as simple as “they’re more famous than me”—it was dollars and cents. I think they thought Black people aren’t going to see the movie, so we don’t need to include the Black chick in the publicity. It’s why I still speak up about billing for all the actors who are coming up now.