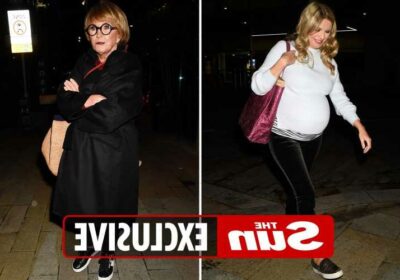 COUNTDOWN's Rachel Riley and host Anne Robinson have been branded a "chihuahua" and a "rottweiler" as their backstage feud spilled into the public eye.

Tensions erupted between the colleagues when Anne, 77, switched off Rachel's microphone after becoming infuriated by her small talk.

But sources have put their friction down to simply being different breeds of people.

And Rachel, a show favourite since joining in 2009 with then-host Jeff Stelling, has done little to disguise her apparent dislike of Anne.

An on-set source added: “They film five episodes a day so it’s pretty full-on. When they meet there is very little small talk.

“Anne was overheard saying ‘Hello’ and asking how Rachel’s day was going. Basically if looks could kill then Anne would be six feet under. Everyone was laughing.

“Anne is a stickler for time-keeping, and doesn’t like seeing the younger crew members, including Rachel, on their phones, on Twitter, constantly. Basically the two women are worlds apart.

Anne is a stickler for time-keeping, and doesn’t like seeing the younger crew members, including Rachel, on their phones, on Twitter, constantly. Basically the two women are worlds apart.

“Anne actually thinks Rachel is incredibly quick-witted, and hugely talented, but the trouble is they’re both Alpha females and, alas, only one can be top dog.

“Unfortunately for Rachel, Anne’s something of a rottweiler to Rachel’s sweet, no-longer-yapping chihuahua.”

According to show insiders, Anne has “done a Piers Morgan” and used her bulging contacts book to book big stars for Dictionary Corner.

She has also insisted on having a say in the editorial sway of the show, ensuring greater “banter” between contestants and presenter.

A show insider added: “Everyone at Channel 4 is secretly thrilled this battle is out in the open — it can only boost ratings further.

“Anne is doing exactly what she said she would when she got the job — delivering and ensuring record ratings at a notoriously difficult time for terrestrial telly. But so much for the genteel world of teatime television!”