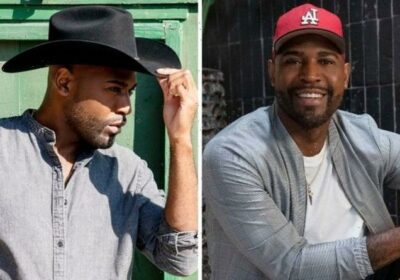 Karamo Brown is best known as The Fab Five’s lifestyle guru, and helps each episode’s guest get inspired to live their lives to the fullest. In the new slate of Queer Eye adventures, the culture extraordinaire found himself knee-deep in mud and farmyard animals, and recently admitted to his Twitter followers it wasn’t his favourite experience filming the Netflix phenomenon.

Culture expert Karamo and the rest of The Five Fab travelled to Texas last year for another 10 episodes of empowering fashion and lifestyle makeovers.

In episode seven, Snow White of Central Texas, the presenters met hero Jamie Wallace-Griner, who learned how to maintain a healthy work-life balance.

Jamie is the founder of Safe in Austin, a rescue ranch for animals with special needs, and helps look after 18 different species of farmyard friends.

Despite her valuable work as an animal activist, Jamie was finding it difficult to find time to focus on her own needs.

Almost as hard as Karamo found spending time with the Queer Eye hero on the farm, he admitted to his 449.2k Twitter followers.

He wrote: “The hardest episode for me was the Safe In Austin (animal rescue) episode!

“I have an extreme fear of animals & farms, etc and I had several break downs.”

“I mean crying hysterically while shooting in front of everyone,” he clarified.

“Loved the hero Jamie but that episode…” Karamo concluded, adding a crying emoji for emphasis.

When pressed on his farming phobias, the Fab Five member admitted he still doesn’t know the source of his animal aversions.

One of his fans asked: “Oh no. What is it about the animals that scares you? I loved that episode.”

To which he responded: “Me and my therapist been trying to figure that out for years lol.”

Thankfully, Karamo was able to hold it together for long enough to give Jamie some valuable lessons on how she can nurture her own self-care whilst still maintaining the needs of the ranch.

Jamie has a demanding job looking after at least 60 animals with special needs, as well as pairing up animals and people with similar disabilities and mental health challenges.

After her Queer Eye experience, which included a brand new barn curtesy of the show’s design whiz Bobby Berk, she took to Instagram to pay tribute to the Fab Five.

“So much to share and so much more to tell you, but incredibly thankful to finally get to scream it out to everyone,” she wrote on the Safe in Austin page.

“I will go into much more detail soon, but the Fab Five are as kind and genuine and loving and wonderful as they seem!

“How insane is it that I get to call them my friends?!?!”

Queer Eye’s Texas road trip certainly won’t be an experience the fabulous hosts will be forgetting any time, though Karamo’s farmyard frolics are almost certainly at an end.

Queer Eye seasons 1-6 are available to stream on Netflix.