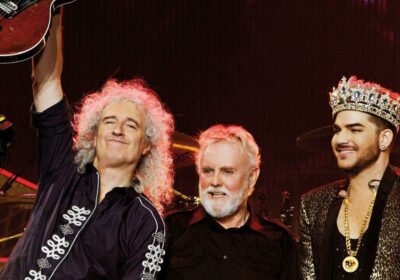 Millions of Brits have been enjoying the four-day bank holiday weekend, but now the biggest party is about to begin.

The Queen’s Platinum Jubilee concert will be taking place outside of Buckingham Place and attracting some of the biggest names in UK music, TV and sport.

Hosted by Kirsty Young and Roman Kemp, people will be able to enjoy the event from the comfort of their own homes.

It will be a three-hour music event that will help tie up the Platinum Jubilee in the perfect way to celebrate the Queen’s 70 years on the throne.

It will also bring stars from around the world for the performance, with countless familiar faces taking to the stage.

What is the Queen’s Platinum Jubilee party?

The whole event is one giant party that will be celebrating the Queen’s historic 70-year reign.

It is taking place outside of Buckingham Palace, with the royal building being lit-up as part of a massive light show that will truly be a sight to behold.

Roman Kemp will be backstage during the event, chatting to the numerous stars taking part, while Kirsty Young will be commentating from St James’s Park.

Teasing the show, the BBC wrote: "The evening will pivot around global themes that have been born, or evolved, during the breadth of Her Majesty’s reign due to extraordinary British and Commonwealth contributions including Fashion, Sport, the Environment, 70 Years of Pop Music and Musicals – the latter curated by legendary composer Andrew Lloyd Webber.

How to watch the Platinum Jubilee party?

For the viewers at home that didn’t manage to get a ticket or simple want to enjoy the event from home, there are two ways to see the show.

It will be airing on BBC One from 7.30pm, with it estimated to come to an end around 11pm.

It will also be able to be live streamed from BBC iPlayer where the show will also remain on catch-up.

Who will perform at the Platinum Jubilee party?

The show is stacked with talent as viewers are spoiled for choice in one of the biggest concerts the UK has seen in years.

Kicking off the show is Queen + Adam Lambert and they will be followed by a who’s who of talent.

Former Britain’s Got Talent winner’s Diversity will also be hitting the stage, along with Sam Ryder who just made history by taking second place at the 2022 Eurovision Song Contest.

Closing the three-hour show is Diana Ross, taking to the stage for her first UK show in 15 years.