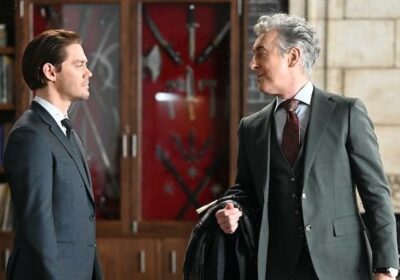 May the best profiler win

Yes, fans may have seen him briefly in the closing moments of the winter finale on March 2 — when he decided that Nicholas Endicott’s (Dermot Mulroney) murder was a crime that must have been committed back in America — but TheWrap has an exclusive sneak peek at the moment our dear Malcolm Bright (Tom Payne) meets the man, the myth, “The Mind Sleuth.”

In the video, which you can view above, Bright is with his NYPD gang, Dani Powell (Aurora Perrineau), JT Tarmel (Frank Harts) and their chief Gil Arroyo (Lou Diamond Phillips), investigating their latest murder, this one committed on a docked boat.

Just as Bright is doing his thing and profiling the heck out of their suspect, declaring “this murder was personal,” the boat’s horn blares and Hoxley comes bursting out of the cabin.

“My stars, that was a tidbit louder than I expected, sorry to interrupt,” Hoxley says. “Now do go on. Actually, don’t bother. This murder wasn’t personal.”

But before Hoxley starts stepping on Bright’s toes by profiling the killer himself, he starts to analyze the entire squad, much to everyone but JT’s chagrin (Hey, he’s a fan of “Hoxley’s The Mind Sleuth” book, OK?).

He then returns to Bright’s analysis of the crime, telling him “You failed to see what is staring you in the face: A targeted assassination.”

“The only way you could come to that conclusion is — is if this murder wasn’t the first of its kind. Is that why you’re really here?” Bright asks.

“Overseas, I was investigating a courier change that moves illicit goods all over the world,” Hoxley says. “Drugs, guns and, perhaps, a particularly gruesome dead body.”

It’s clear he’s talking about Endicott’s body, which only viewers — for now — know that Bright chopped up and shipped off to Europe to cover up his sister, Ainsley’s (Halston Sage) crime, right? OK, good. Or, bad, we guess?