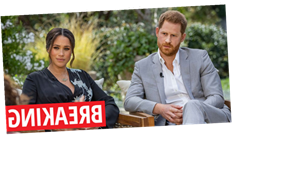 Ofcom has received over 4,000 complaints in relation to Oprah Winfrey's interview with Meghan Markle and Prince Harry.

The chat between the talk show legend and the Duke and Duchess of Sussex was watched by millions of viewers across the world when it aired last week.

However, a report by the UK's communications regulator covering complaints received from Tuesday March 2 until Tuesday March 15 states that 4,398 viewers were not happy with the programme.

Oprah with Meghan and Harry was the second most complained show within the two-week period, according to the official document.

ITV breakfast show Good Morning Britain topped the list with 57,121 complaints about issues related to March 8 and March 9 broadcasts of the programme.

During the interview, the Duke and Duchess of Sussex made several bombshell claims against the royal family.

Meghan, 39, told Oprah that Kate Middleton had made her cry, while Harry, 36, explained that his dad Prince Charles had stopped taking his calls.

The pair, who are parents to one-year-old son Archie, also revealed the gender of their unborn child is a girl.

Former Suits actress Meghan went on to reveal that she "didn't want to be alive anymore" during her time as a senior royal.

She revealed she had suicidal thoughts and said: “I just didn’t want to be alive any more".

Meghan also said that she made the admission so that she could give people hope that "life is still worth living".

And in arguably the most shocking allegation, Meghan accused the Palace of having expressed concern about the colour of baby Archie's skin.

She said that while she was pregnant, there had been "several conversations" within the Palace about "how dark" their baby would have been.

The Duchess also refused to reveal who that conversation was with.

She went on to suggest that it was a "pretty safe" assumption for Oprah to assume that had Archie been "too brown" it would have raised concerns.

However, Meghan chose not to reveal the identity of the individuals who had been engaged in conversations as it would be "very damaging" to their image.

The complaints in relation to Good Morning Britain are from episodes which saw former host Piers Morgan storm off set after a row with co-star Alex Beresford over the Meghan and Harry's interview.

Piers, 55, said he "didn't believe a word" the duchess had told Oprah about her mental health.

He later decided to leave the breakfast show after refusing to apologise for his comments live on air.