PREGNANT Mrs Hinch told fans "Baby Hinch is doing fine" alongside a picture of her unborn child's heartbeat monitor after being rushed to hospital yesterday.

Cleaning guru Sophie Hinchcliffe, 29, said her baby "mini-Hinch" was "doing fine" but is being checked over by doctors until further notice. 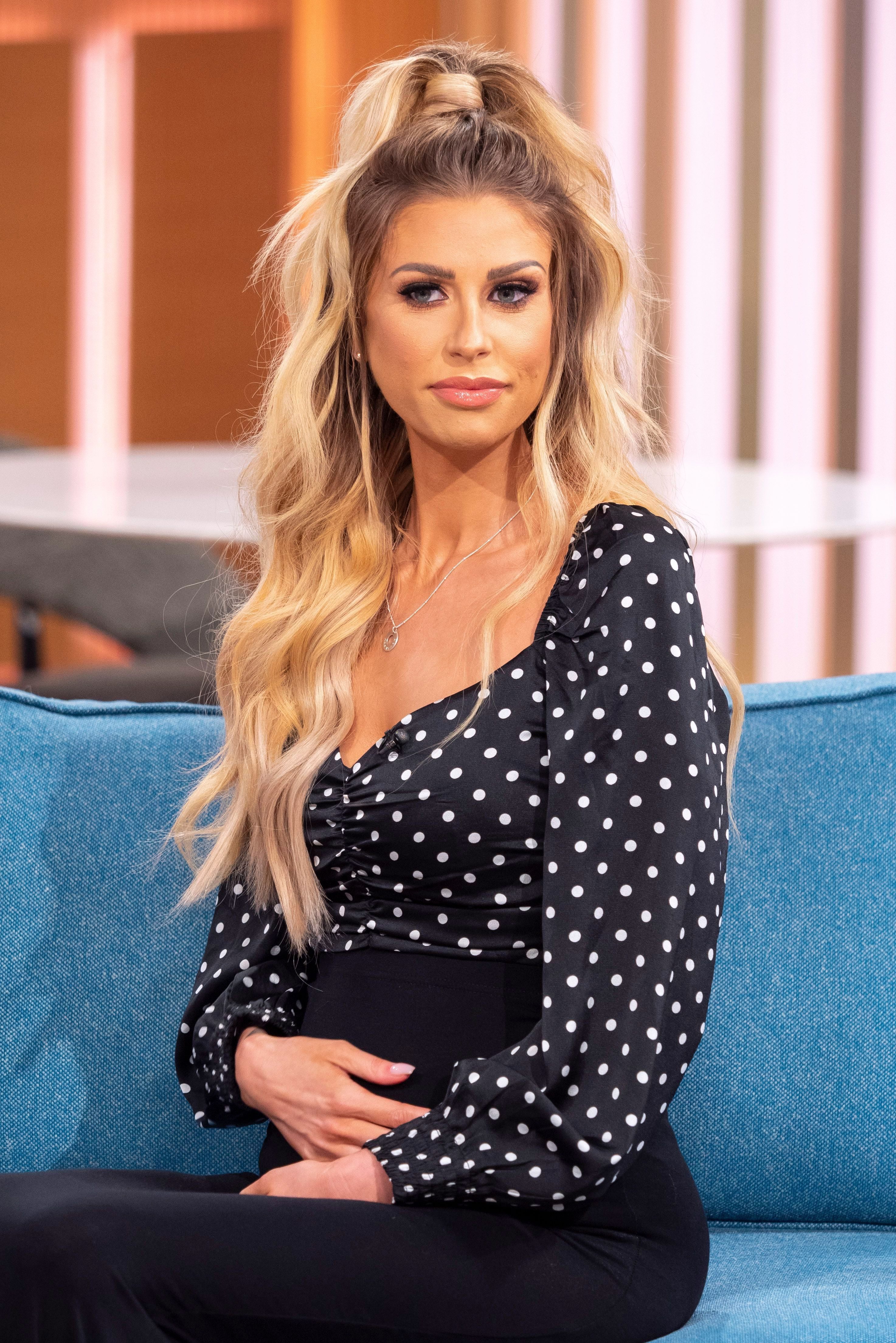 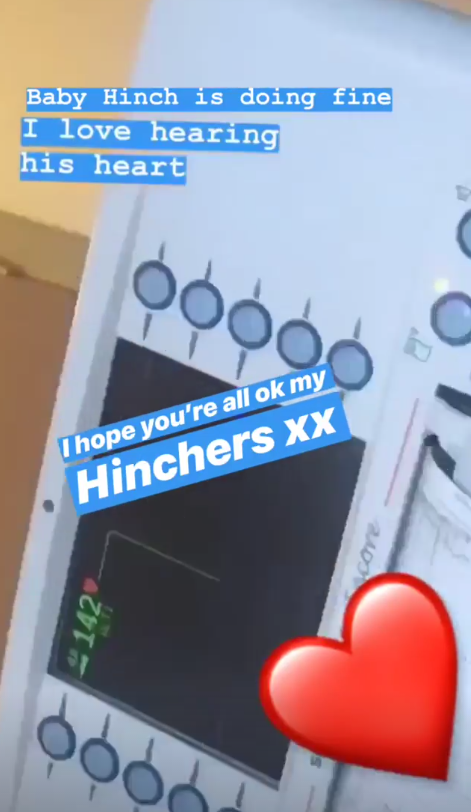 Alongside a shot of the heartbeat, which was registering 142 beats a minute, she added: “I love hearing his heart. I hope you’re all OK my Hinchers xx.”

The star earlier told fans: "While our mini-Hinch is being fully monitored and doing fine, unfortunately I am not well myself and I am in hospital now until further notice."

Referring to her husband, she wrote: "I have wonderful doctors and nurses looking after me around the clock (and Jamie is here being amazing bless him).

"But for now, I have been told I need to focus on getting myself better and keeping healthy in order to carry on growing our mini Hinch and I must listen to professional medical advice." 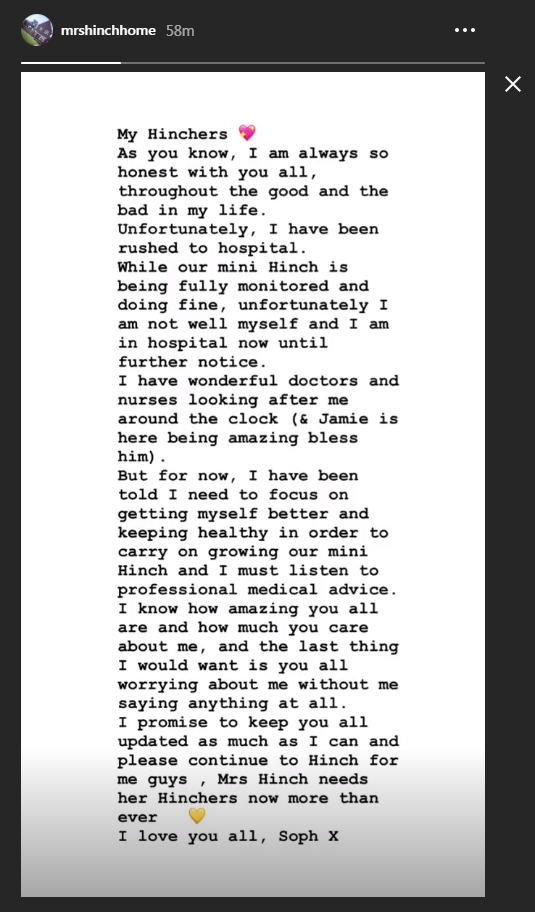 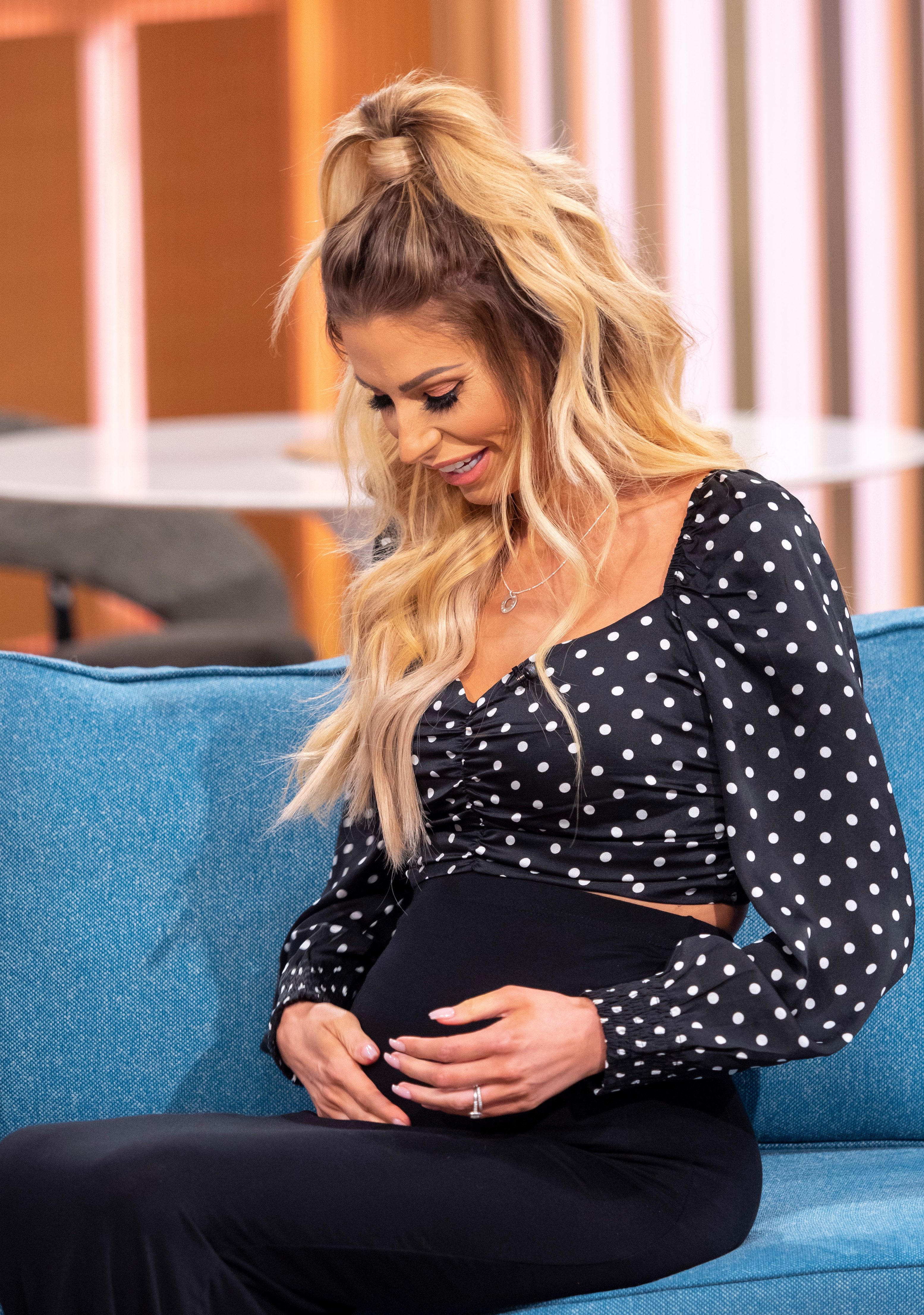 The glamorous former hairdresser appeared on This Morning earlier this month to speak to hosts Holly Willoughby and Philip Scofield about her new book.

Holly congratulated the cleaning whizz on her baby and asked if she would still have time for her Hinching when they arrive.

Proudly showing off her blossoming bump, Mrs Hinch said: “100 per cent. I don’t even clean every day. I think people think I’m at home constantly cleaning.”

Sophie said that she squeezes in her cleans whenever she can, but doesn’t worry too much if she skips a day. 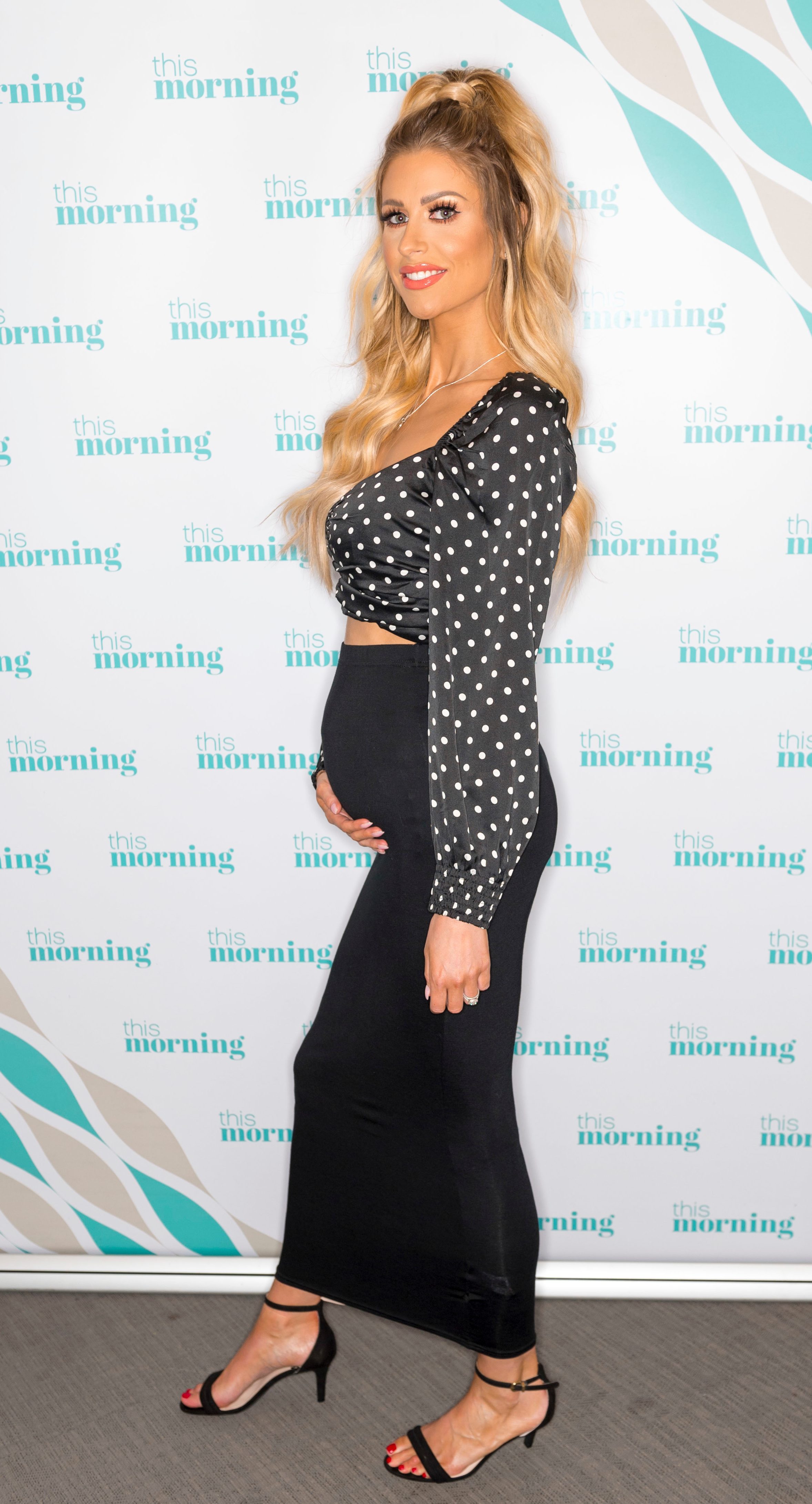 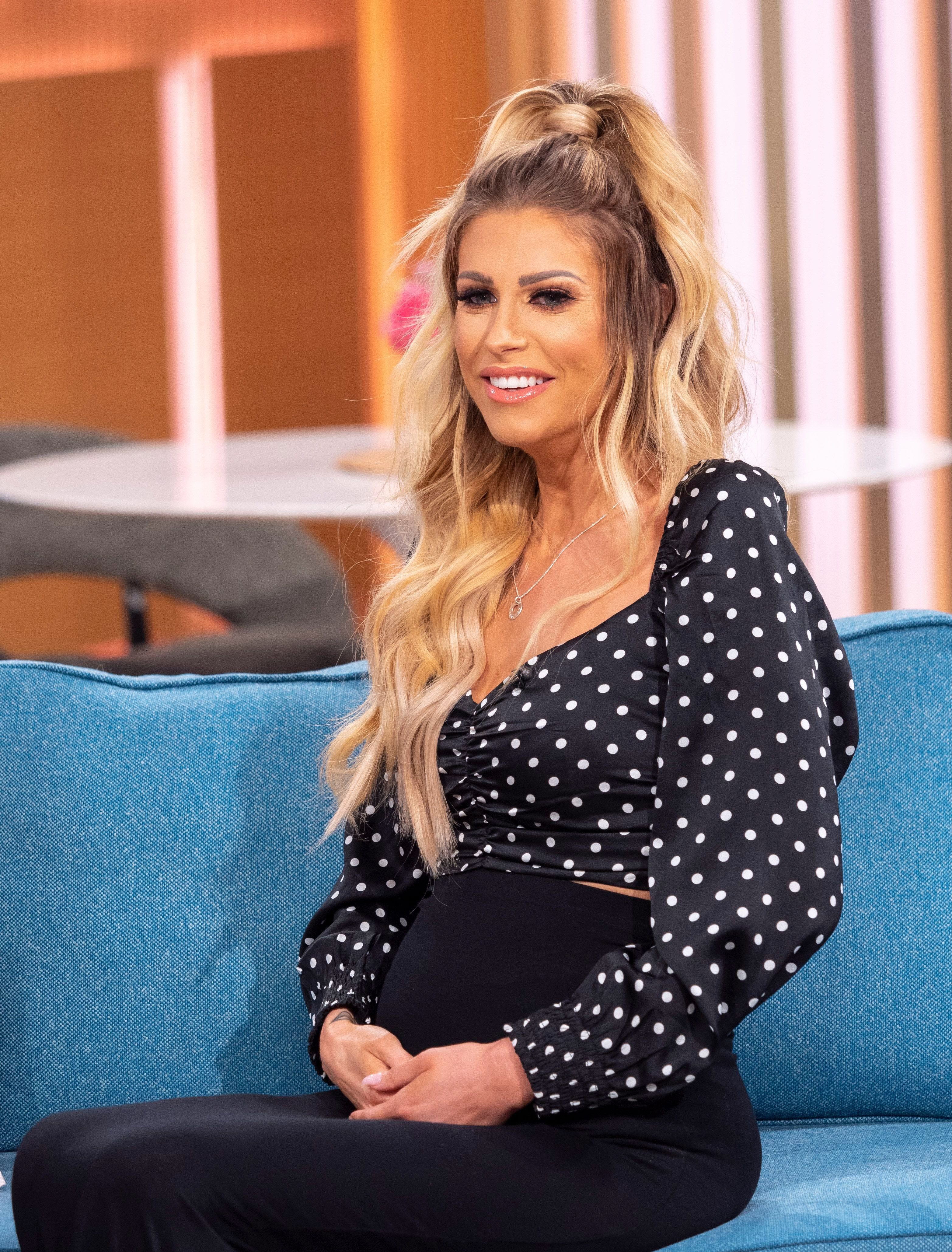 She said: “I like to do my 'Hinch Half Hours' and my little 'Freshen Up Fridays' and there might be some days when I sit there and think ‘I’m not even going to touch a cloth today'.

“I’m so laid back about it. My bed is not made this morning and I’m not worrying about it.

“So for me it’s a case of just going with the flow.”

Millions tune in every day to watch Sophie scrub her home using her cloths and sprays – which all have fun nicknames.

She's the Queen of Clean who has racked up 2million followers thanks to her household tips.

In December, Mrs Hinch announced to her followers she and Jamie are expecting a baby, and revealed the news in a cute Instagram snap. 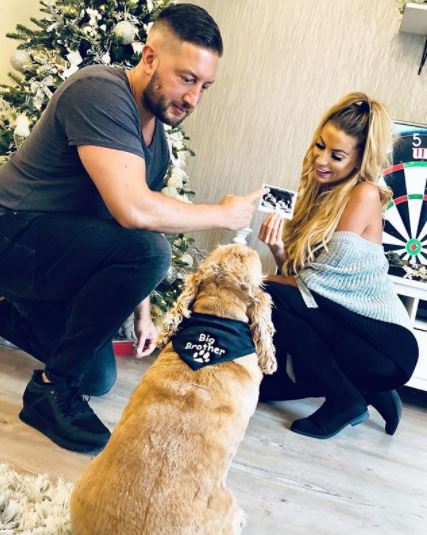 The picture showed herself, her husband and their dog, Henry – who was wearing a “big brother” scarf.

Speaking about finding the time to clean with a baby, she said: “I’m a first-time mum so it’s all new and I know my Hinchers will help me because they’ve said ‘don’t worry I still have time to clean and I’ve got three or four kids’.

“And I’m like I can do this. Maybe I’ll whack the broom out when baby is asleep and we’ll see how we go. I’m just going to have fun with it and just give it my everything I can.” 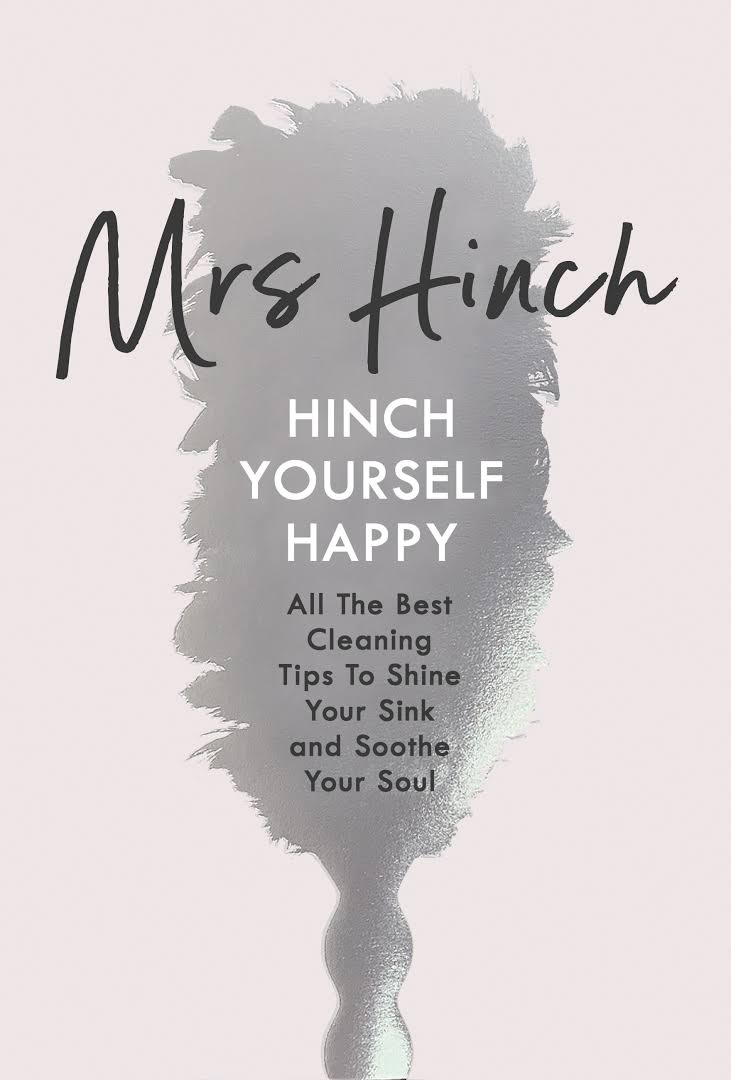 Holly pointed out that Mrs Hinch has shot to fame within a short space of time, and spoke about the release of her book Hinch Yourself Happy, which was released on April 4.

She said: “It’s less than two years since you first posted, and now you have over 2million followers on Instagram, and now the book. How does this all feel? How do you come to terms with all that success?”

Mrs Hinch said: “I don’t think you can. I can’t believe I’m sat here with you guys and I’m on this sofa that I watch every morning. 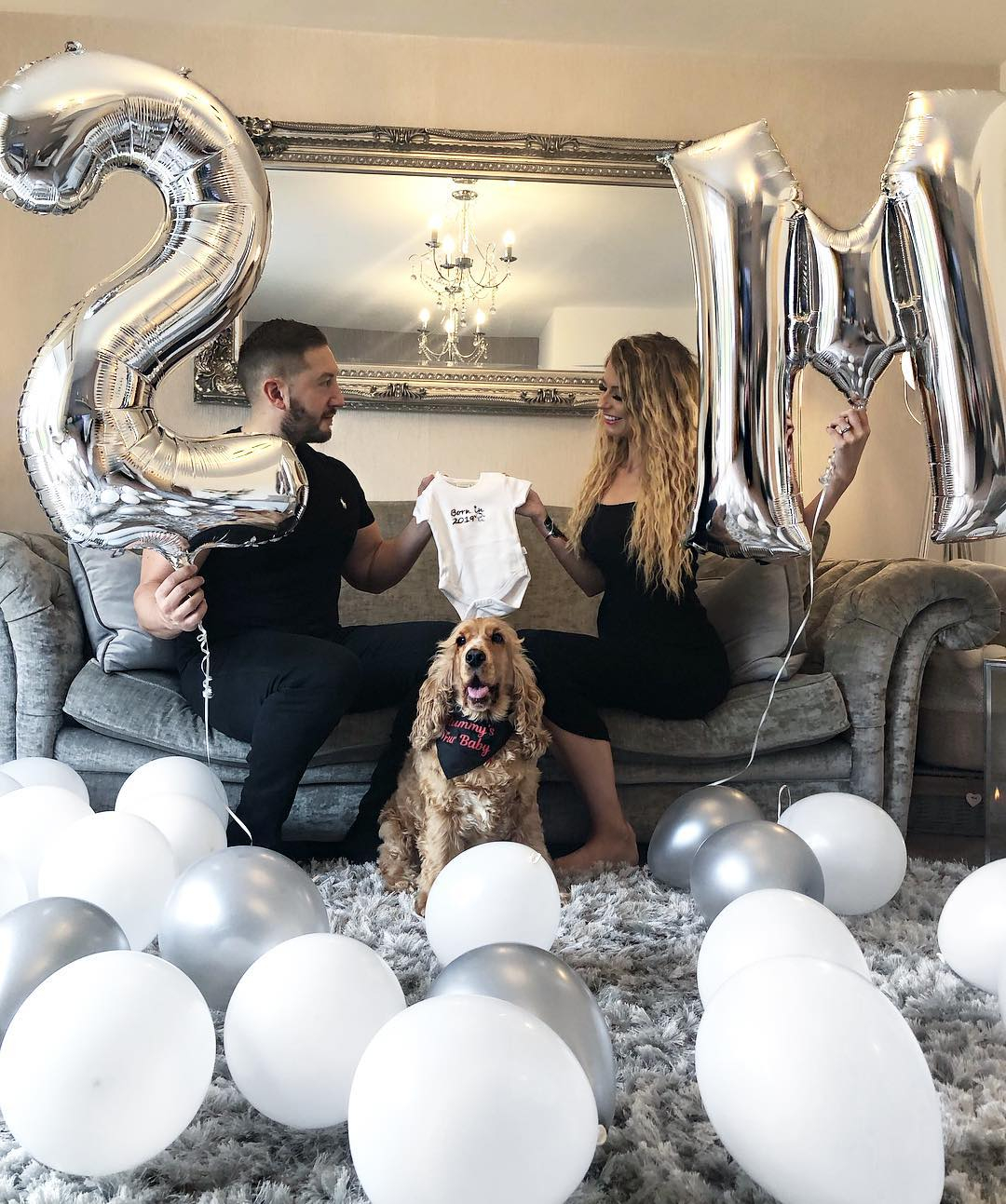 “It’s bizarre but I’m so grateful. It’s overwhelming in a good way because all my Hinchers are so friendly that we all help each other and I’m doing it for them.”

Philip said: “I love the fact you have said they are the ones that have changed your life.”

Mrs Hinch replied: “They message me and they’ll say Mrs Hinch, thank you so much, my life has really changed and you’ve helped me and I’m like guys, it’s the other way round.

“My life has completely changed but I try to keep it as normal as possible.”

Mrs Hinch was left red-faced after accidentally recommending bum oil to her 1.8m fans without realising what it is.

We tried to live up to Mrs Hinch's cleaning challenge – but did we manage it?

And Mrs Hinch uses fabric softener and boiling water to get her sink gleaming – and it’ll leave your kitchen smelling of fresh laundry.