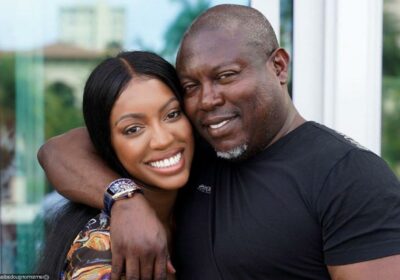 The ‘Real Housewives of Atlanta’ star, who has drawn backlash for dating her former co-star Falynn Guobadia’s ex-husband, seemingly teases her departure with some cryptic social media posts.

AceShowbiz –Porsha Williams apparently has had enough with criticism over her engagement to Simon Guobadia. Having come under fire since announcing her relationship with her former co-star Falynn Guobadia‘s ex-husband, “The Real Housewives of Atlanta” star teased she may leave the Bravo show.

The 40-year-old dropped the hint by sharing a cryptic quote on Instagram Story on Sunday, August 9. The message read, “You can literally feel when it’s time to move into your life’s next chapter.”

Many have since bid farewell to Porsha. One user commented on an Instagram account of “Real Housewives” fanpage, “GIRL BYE no one likes you anyway.” Another echoed the sentiment, “Bye girl.” A third added, “I pray that she does not come back.”

Some others, meanwhile, were saddened upon hearing the news. An individual begged, “NOOO PLS NO.” One user lamented, “Man ‘RHOA’ will be boring without her.” Someone else wondered, “What good will ‘RHOA’ be w/o her? She literally gave the best shade and is the only fun one the cast.”

Just one day earlier, Porsha turned to her Instagram feed to let out a quote about moving on. “The art of being WISE is knowing WHO to ignore, WHAT to overlook, WHERE to leave things, WHEN to move on & WHY its all necessary!!” so read the note.

Porsha went public with her engagement to Simon on May 10. “Our relationship began a month ago–yes we are crazy in love. I know it’s fast but we are living life each day to its fullest. I choose happiness every morning and every night,” she explained. “For all of you that need facts, I get the optics but Simon filed for divorce from a previous marriage in January. I had nothing to do with their divorce filing. That’s between the two of them.”

Noting that she and Falynn “are not friends” and “Simon’s divorce has been settled,” the reality star exclaimed, “It’s truly a beautiful moment in my life & we cannot wait to spend the rest of our lives together. xoxo P.”

The announcement came after Falynn confirmed her split from Simon on April 22. “After two years of marriage and 5 years of friendship, Simon and I have made the difficult decision to go our separate ways,” she declared on Instagram.

Falynn herself denied that her separation from Simon had something to do with Porsha. “No, no one has that power over my life, my husband’s life and our marriage,” she said in a YouTube video. “However, Simon and I were the ones who are married to one another, we’re the ones who created a family together and built a life with one another. I blame the both of us. He’s to blame, I am to blame and that is all.”