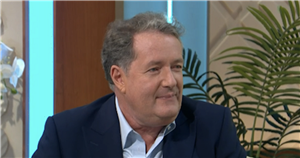 Piers Morgan has made an epic return ITV over a year after he quit Good Morning Britain following a clash with co-star Alex Beresford over Meghan Markle.

The 57-year-old outspoken presenter was back on our screens on Thursday (April 21) morning to chat to his old pal Lorraine Kelly on her self-titled talk show.

He appeared on Lorraine to promote his new TalkTV show Piers Morgan Uncensored, which launches on Monday, April 25.

Before the pair got the chance to sit down and chat, Piers jokingly stormed onto the Lorraine set, referring to the time he stormed off GMB in March last year.

Lorraine was left in stitches as Piers made his way to his seat and they later chatted about what fans can expect from his new series.

Piers confirmed the exciting news of his return to ITV studios on his official account on Wednesday (April 20) morning.

He penned: "BREAKING: I’ll be returning to ITV tomorrow for first time since the Markle Debacle… live & definitely uncensored on ⁦ @lorraine with the fabulous ⁦ @reallorraine – should be fun… (may even storm back onto ⁦@GMB while I wait, & get those ratings back up.)"

The outspoken star offered his opinion on the Duchess of Sussex's then-recent comments about her mental health, including her experiences of racism and suicidal thoughts.

He later stormed off set and quit Good Morning Britain later that day in the midst of widespread criticism from various mental health charities and the general public.

Piers has since admitted that leaving GMB was a sad moment for himself, viewers and his TV wife Susanna Reid.

He explained: "The sort of mystery about the ITV thing is I was simply hired specifically to have strongly held opinions.

"In fact, the theme music when I first joined Good Morning Britain was Sympathy For The Devil by The Rolling Stones so that's why I felt the way I had to leave in the end was so absurd and the more you look back on it you think 'what was that all about?'

"I went from seeing Susanna [Reid] in her nightie and curlers at 4am every day to not seeing her so we stay in touch through texting and stuff but it was all a bit dramatic and sad really. I think we both feel that."

Lorraine airs weekdays on ITV at 9am and Piers Morgan Uncensored launches on TalkTV on Monday, April 25 at 8pm