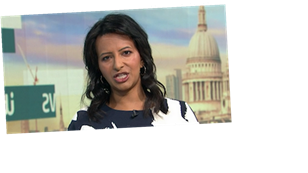 Piers Morgan was replaced by Ranvir Singh on Wednesday after his sudden Good Morning Britain exit.

GMB returned to our screens for the first time this morning since ITV confirmed that Piers, 55, has decided to leave the breakfast show.

The channel said in a statement on Tuesday evening: "Following discussions with ITV, Piers Morgan has decided now is the time to leave Good Morning Britain.

"ITV has accepted this decision and has nothing further to add."

The announcement comes after Ofcom confirmed it is launching an investigation into GMB and ITV after receiving more than 41,000 complaints about Monday's show.

Ranvir Singh, 43, opened Wednesday's edition of the ITV breakfast show and told viewers that the show will be addressing Piers' exit.

She said: "We will be with you right up until 9am with Susanna Reid joining me at 9am."

"We will be talking about whats on your mind, We will get to it but lets jut talk about our top stories."

Piers sparked fury with his comments following Meghan Markle and Prince Harry's interview with Oprah Winfrey on CBS, where they shared shocking details about their time as senior members of the royal family.

During the royal couple's tell-all Oprah interview, Meghan, 39, discussed her issues with mental health and revealed she had experienced suicidal thoughts.

"I wouldn't believe her if she read me a weather report."

An Ofcom spokesperson said: "We have launched an investigation into Monday's episode of Good Morning Britain under our harm and offence rules."

During this morning's episode of GMB, the outspoken host stormed off the ITV set mid-show following a heated discussion with his co-star Alex Beresford.

Alex branded Piers' behaviour "diabolical" and said the presenter had continued to "trash" Meghan Markle after she cut him off. Piers then furiously stormed off set before returning to continue his dispute with the weatherman.

The former newspaper editor took to Instagram to share a picture of him with his late manager John Ferriter last night following his shock exit.

He penned: "Thinking of my late great manager John Ferriter tonight. He’d have told me to do the same thing."

Mental health charity Mind, which is partnered with ITV for the Britain Get Talking campaign, said it was "disappointed" by the comment Piers made in Monday's show.