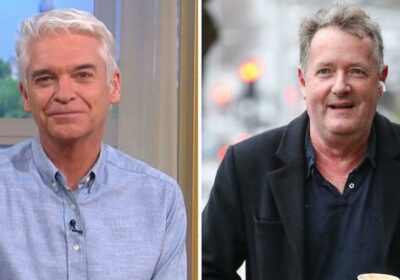 Phillip Schofield has taken a savage swipe at Piers Morgan on Tuesday's This Morning, by claiming he has "a lot of time on his hands."

The 59 year was an ITV colleague of 56 year old Piers' until he sensationally quit Good Morning Britain last month after sparking outrage with his views on Meghan Markle and Prince Harry's interview with Oprah Winfrey.

Piers has now taken aim at Demi Lovato, who recently blasted a Los Angeles-based frozen yogurt shop for selling diet items and providing a "triggering" experience for her.

Singer Demi, 28, who has openly discussed her struggles with eating disorders, took to Instagram over the weekend to write: "Finding it extremely hard to order froyo from @thebiggchillofficial when you have to walk past tons of sugar free cookies/other diet foods before you get to the counter."

Controversial host Piers took to his column for MailOnline to discuss Demi's comments, writing: "I was triggered by Ms Lovato herself.

"The more this repulsively arrogant woman attacked this lovely little store in her staggeringly unhinged and delusional manner, the more furious I became.

"How dare she try to destroy The Bigg Chill simply for doing its job, one that it does very well to widespread popular acclaim?

"Who the hell does Demi Lovato think she is? Well, we know who she is now, don't we…

"She's revealed herself to be a horrible piece of work who thinks the middle of a pandemic that has crushed so many small businesses is the perfect time to try to crush yet another, using the full power of her huge social media platform to do it."

As Phillip and co-host Rochelle Humes discussed the topic, and other Hollywood headlines, with showbiz correspondent Sam Rubin, on Tuesday's This Morning, Phillip decided to weigh in on the row himself and referred to Piers' GMB exit.

He scoffed: "We know that Piers Morgan waded in, so it must be serious. He's got a lot of time on his hands at the moment to worry about yogurt."

By doing so, he risks facing the wrath of the former GMB host, who has accused weatherman Alex Beresford of "whacking him to make a name for himself" in their last on-screen appearance together.

Once again writing in his MailOnline column, Piers referred to Alex as "GMB's occasional stand-in weatherman," before launching his attack.

He said: "As [Alex] delivered his censorious lecture, implying my only motivation for disbelieving Ms Markle's outlandish interview claims was because she 'ghosted' me four years ago after we'd been friendly for 18 months – I genuinely couldn't care less about that, but it was informative as to her character, especially when I saw her do the same thing to many other people, including her own father – I felt the steam rising inside me.

"I don't mind outside guests trying to make a name for themselves by whacking me like this, but I wasn't going to sit there and take it from one of my own team, especially someone who I've gone out of my way to help whenever he's asked me for advice about his career.

"Realising I might say something I'd regret, I decided to leave the studio to cool down."