Peter Kay feared fans had forgotten him after five years away 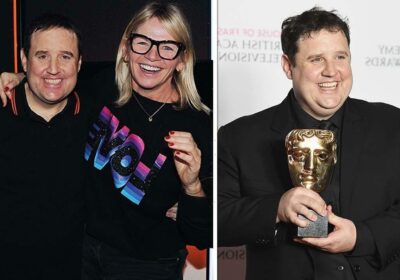 Peter Kay says he wanted to call tour ‘Peter Who?’

Peter Kay opened up on his worry about the nation forgetting who he was before his huge tour announcement on Sunday night. The comedian has added a year-long residency in London’s 02 Arena to coincide with his new huge comedy tour. Peter shared his reaction to Zoe Ball during a special extended interview with the presenter on BBC Radio 2.

He reflected on the huge demand for tickets after his surprise advert during I’m A Celebrity… Get Me Out Of Here!

Peter referred to one of his iconic gags, saying: “I broke t’internet,” before joking: “Whose website crashed?

“I think that’s just a PR thing, they always say something crashed. I don’t think it did crash.”

The star was humble during his interview with the Breakfast Show presenter, as she replied: “The love must feel wonderful though?”

Read More: Ant and Dec face calls to ‘quit’ from I’m A Celebrity

Peter admitted: “You know what? I cannot get my head round it.

“I think we should have called this tour Peter Who because I hadn’t been around for five years.

“I thought who honestly, will – not give a monkeys – but, being on the news can you get your head round that?”

He morbidly quipped: “I should be on the news if I’m dead, not because I’m on tour!”

Elsewhere on the show, the returning star cheekily kept swearing and issued an apology to listeners.

He cheekily added: “I apologise, Britain, for saying that word: b****y.”

His tour advert shocked millions watching I’m A Celebrity on ITV on Sunday, as he announced a new stand-up tour for the first time in 12 years.

During a sketch for the advert, Peter mocked up a scenario where someone recognised him as he was moving in a roll of carpet for his mum.

As part of the interaction, the Bolton funnyman confirmed the news fans across the country have been waiting for and declared tickets for the shows beginning on December 2, would be on sale on November 12.

After the ad he announced: “It’s good to get back to what I love doing best, stand up comedy and if there’s ever a time people need a laugh it’s now.

“With the cost of living at an all-time high, ticket prices are starting from £35. The same price they were on my previous tour in 2010.”

All of the venues initially announced included Manchester, Liverpool, Leeds and other cities across the United Kingdom.

However, on Wednesday, he reassured fans who live south of the country would get a chance to see him too.

The Phoenix Nights star confirmed he would embark on a unique, year-long residency of the 02 Arena.

He will become the first artist of any kind to perform a show each month there from 16 December to the end of 2023.