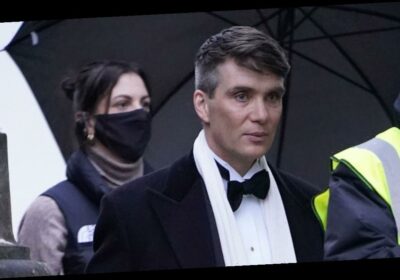 Peaky Blinders is approaching the end of its run, with filming for series six getting underway in various parts of the country including Liverpool, Birmingham and the Wirral.

It was confirmed in January 2021 that series six would be the final instalment of the television series but fans can expect the story to continue.

Lead star Cillian Murphy, 44, looked every inch the part as he slipped back into his gangster character, Tommy Shelby, during filming on Thursday in Liverpool.

Hundreds of crew members descended upon St George's Hall in the city centre as the cast prepared for their latest dramatic scene which featured an anti-Fascism protest outside the iconic landmark building.

The eerily lit scenes saw protesters dressed in black hitting out at the police, which could be linked to former politician Oswald Mosley who entered the show in series five.

Last week, Peaky Blinders took to Twitter to tell fans that Sam Claflin would reprise his role as Oswald in the series.

The Hunger Games actor, 34, plays Oswald who became known as a Member of Parliament in the 1930s and later became the leader of the British Union of Fascists.

Large crowds could be seen waving placards as they made their way to the anti "Black Shirt" protests in the hammering down rain.

Across the city, old-style cars were seen making an appearance as the cast perfected their craft for the dramatic scenes which are believed to air later this year.

While the show is set in post World War One Birmingham, various parts of Britain are used to film on location such as Birmingham, Manchester and even Scotland.

The much-anticipated filming of series six comes after production was halted last year due to the ongoing coronavirus pandemic, meaning the show had to be pushed back a year.

However, it was confirmed in January that filming had once again started, with a picture of Cillian Murphy having his hair cut was shared on social media, instantly sending fans wild.

Steve Knight also confirmed the news, saying: "Peaky is back and with a bang. After the enforced production delay due to the Covid pandemic, we find the family in extreme jeopardy and the stakes have never been higher.

"We believe this will be the best series of all and are sure that our amazing fans will love it. While the TV series will be coming to an end, the story will continue in another form."

Season six sees Tommy return after fans feared the worst when he was seen with a gun to his head as the end credits started to run.

However, Knight may have added a twist to the notorious gangster for the final season, during a question and answer session, he hinted that there may be a supernatural element to Tommy.

"I like the supernatural element. 'Is Tommy cursed?' In other words, is everything predestined, are lives already mapped out? Do you have free will or not?

"Tommy sometimes feels that he doesn't because it seems that everything is destined to stop him or move him in a particular direction. It's the same with the whole family. I explore that more in the next series."

Are you excited for series six? Let us know in the comments below!