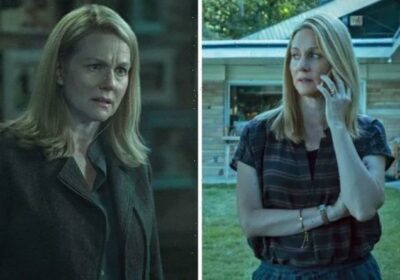 Netflix’s hit crime series is finally returning to screens after it faced major delays due to COVID-19. With Ozark’s return, viewers have tried to predict Wendy Byrde’s (played by Laura Linney) fate and it looks as though someone in her circle could betray her trust.

Wendy and her family relocated to the Missouri Ozarks after her husband Marty Byrde (Jason Bateman) got involved with the cartel and their deal went south.

After watching his associate be murdered, Marty agreed to launder $500 million in five years to save his life.

Throughout the series, Wendy became Marty’s business partner and often took meetings and scheduled hits without him there.

One of the most memorable was in season two when she asked the millionaire businessman Charles Wilkes (Darren Goldstein) for aid.

During this time Wendy came in contact with Charles’ advisor Jim Rattelsdorf (Damian Young), however, he quickly became involved with the Byrde family’s business.

With knowledge of their dealings with the cartel, fans believe Jim is likely to betray Wendy in the upcoming season.

Taking to Reddit to share the theory, SkinnyJoshPeck wrote: “Jim is a ‘man behind the curtain’. He is an insider, he holds no loyalty and works solely in the interest of himself and the future he wants.

“He saw something in what Wendy is doing and is using it (or manipulating her, depends on perspective) to further that goal and protect himself.

“I’m sure he knows about the cartel and would rather put some bet on the cartel in the interest of staying safe if s**t pops off rather than cashing in on Charles.”

With Charles being the fifth-largest business owner in Missouri, Jim being his closest advisor he went behind his back to warn Wendy about Helen Pierce’s (Janet McTeer) attempt to grab the casino.

This may have been a plot to get close to Wendy and her business, which proved to work as he soon became her informer.

User G_dx agreed with the Reddit theory and responded: “Charles is in debt. Wendy is swimming in money, Jim looks like the kind of person who backs the most ambitious person.”

Although not much is known about Jim’s background his skills appear to be from someone who has great investigative training, much like the FBI.

This was seen when Agent Petty (Jason Harner) tried to pressure Charles into giving him incriminating information about the Byrdes.

Jim asked the officer if he was sure he wanted their conversation to be recorded and revealed he knew Petty had fired his pistol in a bar, destroyed his hotel room and beaten up the drug dealer.

Which scared Petty away but raised eyebrows about his skills to viewers and happened again later in season two.

Wendy sent Wilkes a huge donation through Jonah’s fake ”Michael Fleming” persona, which was supposed to be anonymous.

However, Jim used his abilities and was able to go through the bank and find the records to discover it came from a 13-year-old boy who just appeared out of nowhere, and has no background or past.

With these skills it’s likely, Jim is able to use his connection to Wendy and betray her for personal gain, to later completely disappear.

Thankfully, viewers will soon be able to see if this will be the case as Ozark will return to Netflix for its fourth and final season this month.