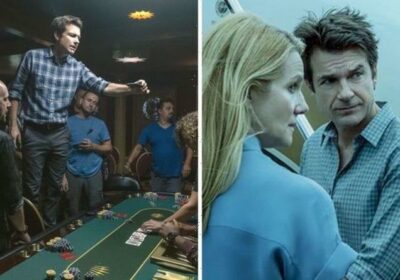 Netflix’s beloved crime series Ozark will finally be returning to screens this month for the last instalment of the show. However, eagle-eyed viewers spotted a huge glaring flaw with Marty Byrde (played by Jason Bateman) and Wendy Byrde’s (Laura Linney) riverboat casino.

Taking to Reddit, user greggpclax32 exposed the plot hole and shared: “When you see the size of the casino boat, it looks to be 45 feet wide and 250 feet long.

“But the inside shots of the casino look HUGE with multiple stories, back and side rooms and offices.

“The law says the casino has to be on the water, so if the outside matched the inside wouldn’t it have to be roughly the size of a small cruise ship?”

Other viewers agreed with this observation as the cruise does appear to be smaller on the outside.

Callingsaraaah suggested: “I think that may be one of the flaws on season three. The inside of the boat must be a set which was wider and longer than the boat was.”

Marty and his wife Wendy first came to own the casino as a ploy to launder millions of dollars for the Navarro cartel.

After relocating to the Missouri Ozarks from Chicago, Marty attempted to invest in local businesses to wash the cash, however, the locals soon grew suspicious of him.

In the second episode of season one, the Blue Cat hotel and bar piqued his interest but it was too small for the $500 million they were forced to launder.

In the later episode of season two, Marty came to have the idea of having a riverboat casino after witnessing the community attending a boat-based church.

With the amount of cash a successful casino brings in, he was convinced it would be the most efficient vehicle to launder the money.

He and Wendy were able to convince locals and investors by saying it would also be a major attraction for the Ozarks.

While it was a huge success for the Byrdes, it soon became a distraction for viewers who couldn’t look past the size differences between the inside and outside.

However, Reddit user unhassled, provided inside information after they claimed to have worked on the show for three seasons.

They disclosed: “It is, the interior is about 12ft wider than the real boat, that exterior boat was acquired for cheap for season two and it’s def a bit too small.

“Actually, if you look closely the exterior of the casino is built on the same dock where Ruth bought it in Season two,” they concluded.

In the upcoming season, fans may soon see another casino as they acquired a second one to launder money quicker.

It wasn’t really shown on screen in season three, as Wendy and the Cartel’s lawyer Helen Pierce (Janet McTeer) closed it for renovations.

As the second casino will also have a hotel, fans will have to tune in to see if it will also be bigger on the inside.

The biggest question viewers have is if Marty will be to successfully launder all the cash for the Cartel and if he will be able to move on with the family.

However, with the tons of complications they have encountered throughout the series, it’s hard to believe things will go smoothly.

Ozark season four, part one premieres on Netflix on January 21, 2022.