Home » TV & Movies » ‘Outlander’: Season 5 Will Force the Frasers to Fight for Their Family

‘Outlander’: Season 5 Will Force the Frasers to Fight for Their Family It’s not easy being a time-traveling band of disrupters and the cast of the Starz epic romance “Outlander” are more than happy to expound on the complications that inevitably arise in their wake.

“You have to be slightly on guard,” Sophie Skelton, who plays Brianna Fraser, explained on Tuesday at the Television Critics Association press tour. “Sometimes in a scene, I’ll want to slip in an, ‘OK.’” Skelton’s concern comes not from deviating from the script, but rather from the fact that her character is a 1960s woman living in a 1770s world and “OK” won’t be acceptable to say for decades – because it hasn’t been coined yet.

Skelton and fellow cast members Caitriona Balfe, Sam Heughan, and Richard Rankin took the stage alongside executive producer Maril Davis to answer a bevy of questions from entertainment journalists about Season 5 – which premieres Sunday, February 16 – and the future of the show in general.

“It’s one of the unique challenges of this job,” Balfe (Claire Fraser) added, “That thing about playing someone from another time, but in another time. It’s that duality of being modern but having to fit in and assimilate.”

Season 5 of the series will see the Fraser family fighting to defend their home in colonial-age North Carolina, which Claire understands is heading smack-dab into a conflict that will ultimately birth a nation. The family will grapple with growing tensions between the ruling class and the Regulator Movement, an uprising that saw backcountry settlers clashing with colonial officials that didn’t have their best interests at heart.

To that end, the groundwork is laid for Claire to do what she does best: Trying to better the past by making use of her knowledge of the future.

“She takes these big chances, exploring surgeries she would have done in the 20th Century,” the actress said, going on to add that Claire would also be experimenting with the development of more modern medicines.

She refers, of course, to the character’s penicillin, which has previously made several appearances in the series, thanks to a syringe secreted from a more modern age. But Claire’s medical meddling isn’t going to come without a cost.

“It will be a cause of a lot of pain and trouble for Claire further down the line,” Balfe said, with Heughan (Jamie Fraser) joking, “We’re constantly trying to change history, but we never learn.” 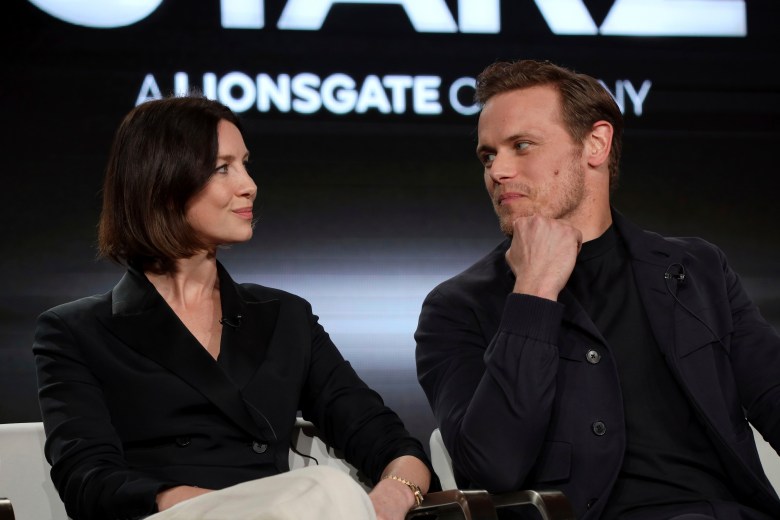 Jamie’s arc in the upcoming season will have him reckoning with the past more than becoming preoccupied with the far future. For one thing, the growing civil unrest will force him into military action, but instead of instigating an uprising, he’ll be working to quash the common man. And to do so, he’ll need a new uniform.

“I thought it was a strong visual,” Heughan said, referencing the red coat that Jamie will reluctantly don during the season, suggesting fealty – at least temporarily – to the crown. It’s a twist that comes not from Diana Gabaldon’s books, but from the actor himself. “It would go against everything he stands for and what he fought for.

Beyond that, Jamie will also struggle with one of his dearest relationships, with his godfather, Murtagh Fitzgibbons, serving as a leader of the Regulator Rebellion. Fans will also be given a window into the background of the Murtagh/Jamie kinship with scenes flashing back to Jamie’s youth, when Murtagh served as a father figure and confidante.

If you’re the particularly anxious type who dreads the beginning of Season 5 because it means the eventual end of Season 5 and a return to the dreaded Droughtlander, take heart that Starz has already renewed the series for a sixth season.

And Davis has every confidence the show will continue long after that.

“We’ll keep going,” she said. Gabaldon is continuing to churn out novels in the series, so unlike something like HBO’s “Game of Thrones,” running out of material isn’t really an issue. If Starz and the cast are interested, the show will continue.

To stoke anticipation for the return of “Outlander”, Starz released a new photo of everyone’s favorite unstuck-in-time family, as well as a clip featuring footage from the upcoming season, replete with cast interviews discussing the intricacies of their character journeys in the episodes to come.

Check out the clip below: