How do you kick off Season 2 of one of the biggest unexpected TV hits of last year? Naturally, with the show’s main character telling the audience, “Here’s a fun fact: Everyone you know will die.”

Let it never be said that “Outer Banks” isn’t full of surprises. Those out-of-nowhere touches don’t always land as intended, but over the course of a pair of seasons, this Netflix series built around adventure-seeking teens has rarely gone for the uninteresting choice. It’s a show that’s often as baffling as it is entertaining, largely because one of those tends to accompany the other.

With seemingly no room for it to one-up itself after its freshman season culminated in a centuries-brewing hunt for a giant trove of shipwreck gold, “Outer Banks” Season 2 quickly turns its attention overseas. Its central star-crossed couple, John B (Chase Stokes) and Sarah Cameron (Madelyn Cline), have absconded to the Caribbean, far from the coastal North Carolina comforts of home. No longer separated by the social and class hierarchy of their high school bubble — Sarah has effectively renounced her family to side with the group of “Pogues” that John B is the nominal leader of — the pair are on the run largely because John B is labeled a fugitive for a crime he didn’t commit.

Back at home, the rest of the pair’s tightknit friend group is trying to clear John B’s name. The disbelieving police force won’t take any of their evidence. Public opinion among the area’s country club set seems fixed that someone from the working-class area of The Cut is responsible for the murder that led to the John B manhunt. While emotions are flying around as fiercely as the accusations, Kie (Madison Bailey) and Pope (Jonathan Daviss) and JJ’s (Rudy Pankow) proximity to an even bigger truth about the riches of the area makes them more of a target than before.

At times, “Outer Banks” has a way of painting itself into a corner. For all the expansive aerial shots of North Carolina coastline and wide-open waters, this ongoing saga of gold and treasure and any number of egregious felonies has concentrated around a handful of players. Most of this cast is capable of handling the many ways these characters have to hop from location to location and fistfight to fistfight. After a while it’s exhausting on some level to see how many times a half-dozen people can circle around each other’s fates and survive so many dangerous shootouts and life-or-death showdowns. 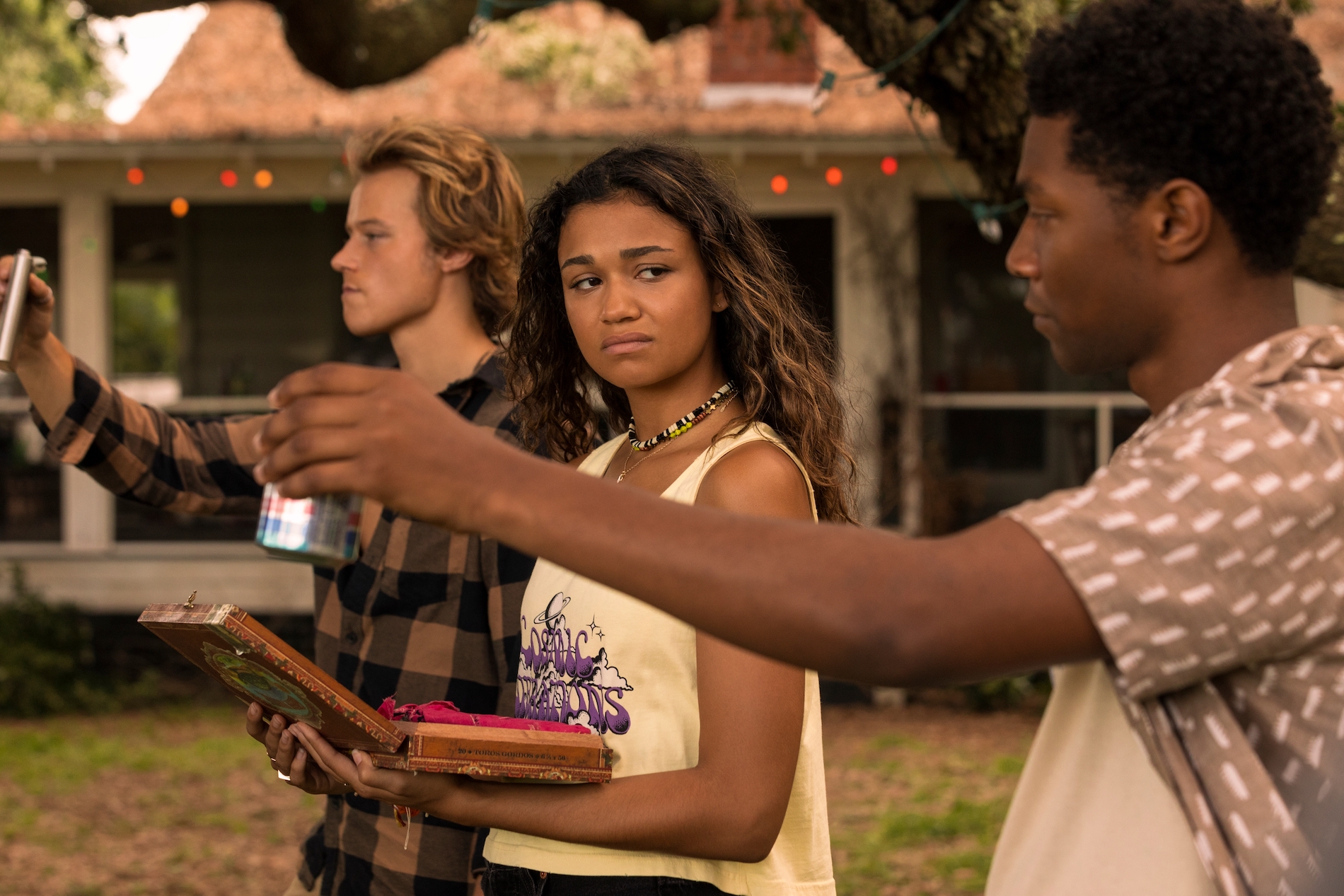 Conflict is easy to come by in the world of “Outer Banks,” but it never quite seems to be enough. Over the course of an entire season it’s glaring the number of times that the show manufactures a problem for the Pogues or Sarah’s reeling family to face, simply because getting from Point A to Point B would happen too quickly to fill out an episode’s runtime. A dropped phone, vehicle trouble, some animal run-ins: this show’s way of catastrophizing the absurd would feel artful if it had room for variety. Instead, every new complication feels like a life-threatening problem, even when it’s at worst a minor inconvenience. (One laughable predicament involving an unfortunately timed construction truck is the closest the season comes to being self-aware about its own cavalcade of coincidences.)

Two performances from the show best encapsulate how “Outer Banks” is able to succeed, in times almost in spite of itself. Sarah’s father Ward Cameron (Charles Esten) has evolved from disapproving, overprotective parent to ruthless criminal mastermind at warp speed. Through that hyperactive change, Esten has managed to match the show’s pitch at every turn, playing into the utter desperation that this conspiracy of gold has visited upon him and his family. Balancing out the other side is JJ, the member of the Pogues trying to make the most out of a life shadowed by an absent, abusive father. As each person in this friend group does their best to contribute to any number of rescues and escapes, Pankow is the one who best brings an awareness of the stakes and the right level of a joking attitude to undercut any creeping self-seriousness.

The show’s greatest asset is still the Pogues. As a unit there’s an easiness to their back-and-forth whenever there’s a break in the action. When “Outer Banks” gives them some breathing room to learn about and from each other that comfort makes for something both grounded and satisfying. That Season 2 manages to squeeze in some of the carefree high school kickback sessions that peppered previous episodes is as confounding as it is welcome. (How best to deal with the looming threat of a goon squad of treasure-hungry obsessives who will stop at nothing to claim their loot? Go to a beach bonfire, naturally.) The bookends of Season 2 are high-stakes battles with increasingly nefarious forces — trying to pretend the first never happened and that the second isn’t inevitable is either the show perfectly honing in on a kind of teen naïveté or trying its hardest to bring back everything that people may have liked about the first season.

Aside from those confusing detours, “Outer Banks” does have other stretches that aren’t just excuses for more sun-drenched danger. With the gold in a definite location, the show conspires to whip out yet another series of arcane clues and oblique hints to secret locations. This one is even more explicitly a quest than the first, continuing to scratch that itch that also put the first season in the CW-styled middle ground between “The Goonies” and “Indiana Jones and the Last Crusade.” As this year’s “Panic” proved, it’s very easy for a show with that framework to sour quickly — there’s a deceptive degree of difficulty in staging a soapy adventure like this. The relative success of this show, pitched in a way that staves off its more destructive impulses, is a testament to how well everyone involved manages to play along. Maybe it’s a show that’s still trying too hard at points, but it’s easy to imagine that fans of “Outer Banks” watching Season 2 will find much of what they’re searching for.

“Outer Banks” Season 2 is now available to stream on Netflix.