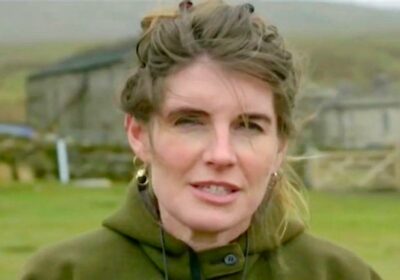 Amanda Owen has thankedOur Yorkshire Farmviewers for their support after the family’s recent heart-breaking loss.

The 47-year-old was in bits on this week’s episode of theChannel 5documentary series as she was forced to tell her kids their beloved Shetland pony, Little Joe, had died suddenly at the age of 40.

Amanda had discovered Little Joe, who the kids had grown close to over the years, when she went to check on the ponies first thing in the morning.

Naturally, the little ones were devastated at the sad loss of their equine pal, but Amanda’s daughter Clemmy, five, said she was happy they’d looked after him really well.

After breaking down on camera, the shepherdess took to Twitter over the weekend, expressing gratitude to the show’s fans for their kind words.

Alongside a series of moving snaps showing her kids and the adorable black pony together, she wrote: “Thank you to all the people that have sent us sweet messages about Little Joe. He had a heart of gold.

“He might have gone away, leaving earthly pastures to roam the Elysian Fields, but his legacy remains," the mum-of-nine added.

Amanda explained that his legacy was her "children’s love of horses”, before posting a string of horse and heart emojis.

The support continued to pour in, with one follower penning: “He had the best life with you and your beautiful family, Amanda."

“He was a great age. I’ve had two big horses make it to 36, which is amazing, but 40! What a testament to the care you’ve given him, hugs to you all," wrote a second.

A third kindly commented: “He was such a special pony and you can clearly see how much he meant to you all. ‘Once touched by the spirit of a horse, one's soul remains forever enlightened’. RIP, Little Joe."

Our Yorkshire Farm follows Amanda and her husband Clive, who run Ravenseat, one of the remotest sheep farms in the UK.

Throughout the series, viewers get to watch the family go about daily farm life, sharing in the joys and pains of a tough but rewarding existence.

The Owens also recently said goodbye to one of their beloved sheepdogs.