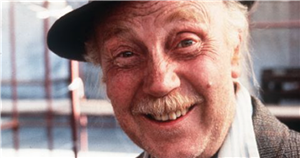 Only Fools and Horses star Lennard Pearce once had an encounter with Adolf Hitler and missed the opportunity to stop the Second World War.

The actor suddenly died from a heart attack aged 69 in December 1984 during the fourth series of the comedy sitcom.

The character rarely left the living room where he famously watched multiple television sets at the same time.

He was full of sarcasm and and his quick wit made him popular with viewers and co-stars Nicholas Lyndhurst and David Jason, who played Rodney and Del Boy.

Pearce, who played Grandad for 23 episodes, had plenty of stories to share while the cameras stopped rolling.

He met Adolf Hitler in the 1930s, when he was in his early 20, and he said he missed an opportunity to kill the dictator.

The late TV star had told pals that he regretted not killing him and thereby preventing the Second World War.

Pearce, who was born in 1915, relayed the story to his Only Fools And Horses co-star Lyndhurst.

He said on The Stay of Only Fools and Horses back in 2017: "He was a young actor touring Europe and they were playing some German city and the Nazis walked in. "The top honchos of the Nazi party had seen the play and came to congratulate them ­afterwards". Lennard shook hands with Adolf Hitler.

"He only ever told me once, but he said: 'Had I known then what I know now, I would have drawn the pistol from one of the bodyguards and I’d have done my best to kill him."

Steve Clark, author of Only Fools and Horses – The Official Inside Story, added: "We’re used to hearing Uncle Albert’s stories about his rather dubious wartime service in the navy, but it’s incredible that Lennard Pearce actually met Hitler during his rise to power and could have put a stop to him before he was able to do so much evil." Lennard's death was one of five on the hit show.

Actor David Jason wrote in his new memoir Only Fools And Stories: "People talk about the curse of Dad’s Army, but surely the less noticed curse of Only Fools runs it a close second."

Earlier this week, Tessa Peake-Jones, who played Raquel Turner from 1988 until the sitcom's last episode in 2003, appeared on Steph's Packed Lunch to discuss a potential one-off special.

TV presenter Steph McGovern asked: "Do you think you would ever like to see it come back again, obviously different writers and various different cast members? But what would [it be] like to be part of a remake if there was one?"

Tessa replied: "I think we all probably feel the same now if you asked any of us.

"I think we feel that time has now gone and because John Sullivan the wonderful writer who isn't here anymore, who was a genius at writing the scripts, I think probably wouldn't be the same.

"I wonder if it's best left where people remember it for what it was rather than seeing us sort of all elderly and perhaps not remembering our lines quite as well. It may be better to leave it."