The first shot of “Nine Perfect Strangers” is not, in fact, one of the titular strangers. Not one member of the starry ensemble is featured in the opening moments of Hulu’s limited series — not its Oscar-winning executive producer and star, nor either of its two-time Oscar nominees. Instead, all you see is fruit. Diced strawberries, a chopped banana, a few blueberries. They’re all sitting in a slowly churning blender, about to be puréed into gloppy, pink, mush.

Over the course of the first six episodes, audiences will become quite familiar with what it looks like to see vivid chunks of seedy snacks being diced into drinks. Watermelons, mangoes, raspberries — you name the fruit, it’s going to get liquefied. Considering the artful colors splashing around those violent blades, it’s hard to tell if series writer David E. Kelley has an unhealthy smoothie obsession or a frightening vendetta against fruit. But one thing is clear, from both the shot repetition and their priority placement over actual, very popular people: There’s something going on with these shakes.

Except no, there isn’t. Why would you think that? All of the ornate shake-making, all those little straws sliding between multihued ice chunks, all the warnings from resort staffers to their thirsty guests not to share their beverages — “they’ve been specifically calibrated for you!” — those are just for fun. For the mise en scène. For color. “Nine Perfect Strangers” withholds its smoothie reveal long enough to make viewers question their own sanity. “There were shakes, right? And they talked about them a lot? There has to be a payoff eventually.”

By the time it arrives, the build-up is akin to finally seeing the next Bond film. But “Nine Perfect Strangers” — directed by Jonathan Levine, co-written by Kelley, John Henry Butterworth, and Samantha Strauss — treats this moment like it’s both a shocking twist of fate and no big deal at all. Tossed in as a desperate, unnatural kicker to end the third episode, the painfully obvious “revelation” emphasizes the emptiness of the series around it, while embodying the big picture problems plaguing Nicole Kidman’s latest disappointing limited series: There’s nothing special here, and whatever juice was stirred into Liane Moriarty’s bestselling novel of the same name, that’s been squeezed out of this languid, lost eight-episode drama.

With a stacked cast and a creative team meant to invite comparisons to “Big Little Lies” (Kidman stars, Kelley writes, and Moriarty started it all), “Nine Perfect Strangers” tells the story of nine seemingly disconnected individuals invited to a private retreat run by an inspiring leader who promises to change their lives, presumably for the better. Shortly after the first fruit encounter, each of the resort’s guests are introduced as they make the winding drive to their mysterious destination.

There’s Ben (Melvin Gregg from “High Flying Bird”) and Jessica Chandler (Samara Weaving), a young married couple who could use a romantic shot in the arm; Lars Lee (Luke Evans), a curt man who likes his Hostess Snowballs, perhaps because he’s still hurting after getting dumped; Carmel Schneider (Regina Hall), a relentlessly optimistic divorcée with rage issues; the Marconi family, made up of Heather (Asher Keddie), Zoe (Grace Van Patten), and, I shit you not, Napoleon (Michael Shannon); Tony Hogburn (Bobby Cannavale) a proud grump whose chronic pain formed an addiction to more than his bad mood; and Frances Welty (Melissa McCarthy), a novelist who’s having a hard time selling her latest book, which is particularly bad timing given she’s just been catfished for a chunk of change. 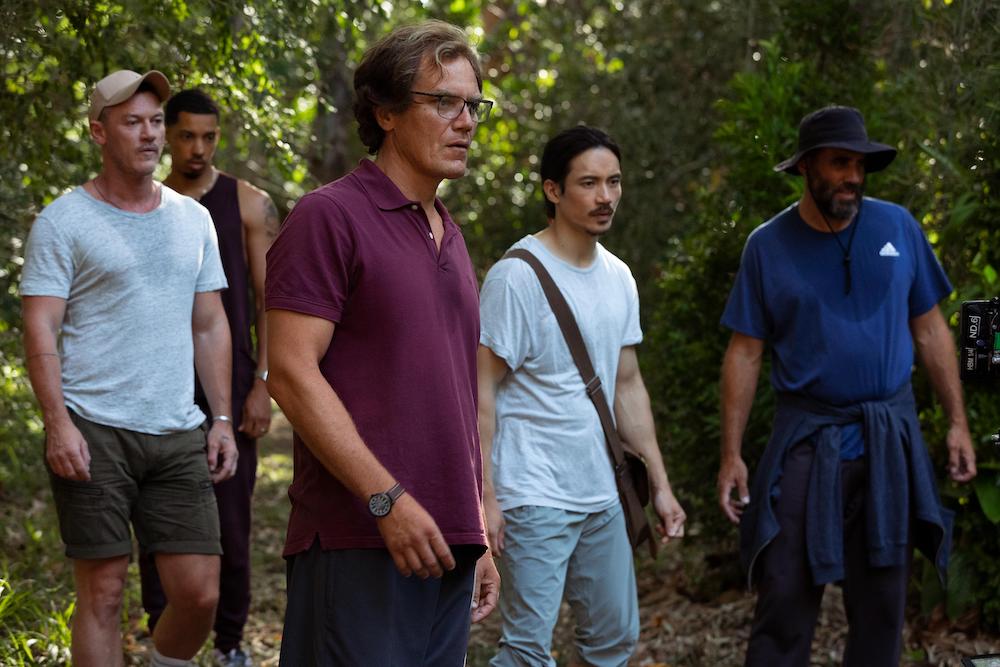 All nine of these strangers have been chosen to attend a 10-day seminar in which they’ll be healed and transformed, and all nine are paying a hefty fee for the experience. Well, actually, only six are paying the full freight: The Marconi family was offered a discount to be there, considering Napoleon is just a public school teacher, and the rest of the group seems fine with it considering no one is there by accident; the guests were selected to attend not only based on need and willingness, but because they bring out essential elements of one another. These nine folks may come in as strangers, but they’ll leave having helped each other reach a higher plane of existence.

Or so, that’s what founder and director Masha Dmitrichenko contends. Played by Nicole Kidman with a Russian accent that rises and falls whenever she feels like it, Masha (pronounced like you yawned while saying “Marcia”), used to be a bad lady in her home country. She tells the group they wouldn’t have liked her back then, but after a near-death experience, Masha turned her life around, started this exclusive retreat, and has been helping people ever since.

And yet, someone is trying to kill her. Lingering in the background of each episode is an unidentified threat to Masha. Someone is watching her, calling her, texting her, and leaving blunt threats on the walls of her forest dwelling. Close-ups of Kidman’s wide-eyed expressions show she’s quite scared, even if she tells her staffers (including “The Good Place’s” Manny Jacinto and “Hunters’” Tiffany Boone) not to worry about it. She’ll be fine. It’s just some asshole from her past trying to screw with her.

With a suspected killer on the loose and a dozen melodramatic backstories to untangle — not to mention the Great Smoothie Mystery — one would think “Nine Perfect Strangers” has to be entertaining. Maybe it’s not top-tier TV, but with that cast and that much going on, what kind of bizarre behind-the-scenes equation could result in these less-than-an-hour-long episodes being anything less than escapist amusement?

Let me tell you, dear reader, they figured it out.

How, exactly, seems even more improbable this soon after “The White Lotus.” Despite similarities between the two stories, fans of Mike White’s excellent HBO series (about rich vacationers spending a fateful week at a luxurious resort) won’t be satisfied with Hulu’s unintentional successor. (Anyone who claims “Nine Perfect Strangers” is the superior of the two can no longer be trusted with television recommendations — not because “The White Lotus” is above reproach, but because the number of shows worse than “Nine Perfect Strangers” is negligible.) 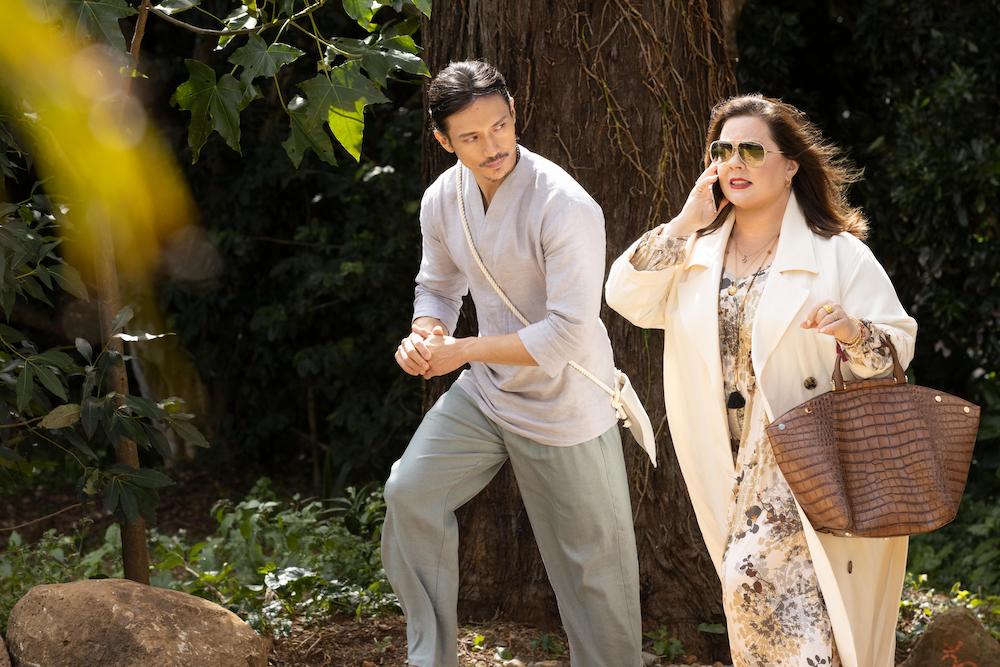 For one, “Nine Perfect Strangers” isn’t satire; there are moments where its unearned developments and forced dialogue verge into a kind of campy, meta self-commentary, but the series’ lack of style, excitement, and self-awareness keep it from being a purposeful foray into inanity. (Kidman, though, is in true IDGAF-land.) Even the excessive smoothie coverage doesn’t click as commentary on the wellness industry; Masha’s retreat is isolated to itself, not an example of more resorts. It’s also just very, very uneventful. Little imagination is put into the activities each guest goes through at this exotic, life-changing retreat — there’s a potato sack race for Pete’s sake — so there’s no reason to believe Masha’s brainchild could’ve earned its in-demand reputation among the snobbiest clientele imaginable.

And these folks are snobby, and entitled, and almost entirely unsympathetic. Yet the scripts don’t seem to recognize any of that; they aren’t looking to comment on their characters’ privilege, nor are they all that interested in honoring any lingering emotional intelligence. Performers like Shannon, Hall, and Cannavale do their damnedest to imbue grace and nuance where they can, but they’re constantly hamstrung by simplistic backstories and choices that prioritize plot over logic. With a cast this big, balancing each character arc in parallel to the collective story’s larger trajectory can be daunting, but “Nine Perfect Strangers” gives its audience no reason to invest in the retreat as a one-of-a-kind locale, its subjects as human beings with agency, or its greater purpose as anything other than a fancy vacation for its famous creators.

But hey, at least the smoothies look good. That’s what people came to see.