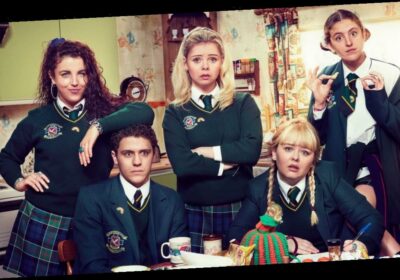 Nicola Coughlan dropped the ultimate bombshell as she took to her Twitter page to reveal that Derry Girls is to commence filming this year, bringing fans the much anticipated third series.

The actress who plays schoolgirl Clare Devlin in the hit Channel 4 show said that the ongoing coronavirus pandemic had halted filming on more than one occasion but fans don't have to wait that much longer.

Season two of the hit show which follows a group of teens living in Derry-Londonderry during the Troubles of Northern Ireland in the 1990s last aired in April 2019.

Filming was set to get underway in the Spring but due to the various lockdown periods, it was put to one side.

Now, Nicola has finally shared the news fans have been anxiously waiting for.

After one eager fan took to Twitter to beg that season three gets underway this year, the 34-year-old actress penned: "Can confirm Series 3 of Derry Girls is filming this year and I cannae bloody wait.

"Covid has pushed back filming several times which has been so sh*te, but honestly the storylines in this series are the best we've ever done so I can't tell you how worth it the wait will have been."

Speaking to Entertainment Tonight, the Galway girl couldn't contain her excitement as she awaited confirmation for a filming date.

"It's written and ready to go, we're just waiting for the green light when it's all COVID safe, I already know all of the storylines and I'm so excited.

"Genuinely – and I'm not just saying this – I think it will be the best one, I'm so excited."

Shortly after filming for season two was wrapped, Channel 4 instantly commissioned another season, with Head of Comedy, Fiona McDermott saying: "It's no surprise that Derry Girls continues to delight a growing legion of fans.

"A combination of magical writing and adorable characters make this show both timely and timeless.

Season two of Derry Girls came to an end as President Bill Clinton making a visit to Derry in 1995, at the start of the peace process.

Meanwhile, 50 Shades of Grey actor Jamie Dornan recently teased that Derry Girls creator, Lisa McGee, had been in contact with him.

The Belfast-born star told Vulture: "I know Lisa McGee, who created it, we emailed today about something actually.

"We'd talked about trying to get me to do something and it just kind of never worked out with locations and when they shoot, and I'm always away.

"I like the idea of popping up in that show, and I think it's genius, and it makes me so proud."

Derry Girls seasons One and Two are available to stream now on Netflix.