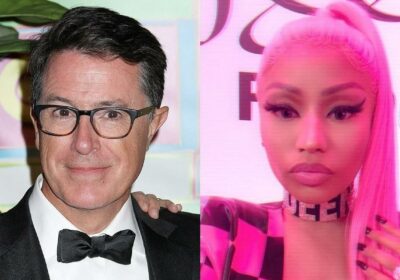 The ‘Super Bass’ femcee is mocked by the ‘Late Show with Stephen Colbert’ host after claiming her cousin became impotent and got dumped by his fiancee after taking Covid jab.

On Tuesday (14Sep21), the rapper tweeted she had caught the coronavirus and shared her hesitation about getting the vaccine, stating a friend of her cousin’s from Trinidad developed swollen testicles and impotence after getting his jab and was dumped by his fiancee.

On his Tuesday night show, Colbert and his team revamped Nicki’s 2011 hit as “Super Balls,” with all-new lyrics.

“This one is for the boys with the swollen testes/ It’s a tale that was told by my cousin’s bestie,” the clip began, with funny shots of pairs of basketballs and beach balls.

“No need to fact check him/ Or debunk him/ Said the vax filled his sack/ With two massive pumpkins/ And it’s sad, too bad, his bride got mad/ How could she love a man with some beach ball nads (testicles)?”

The late night host also slammed Minaj for her comment that she was “doing research” before she’d consent to be vaccinated.

“I can’t believe I have to say this, but doctors agree that COVID vaccines do not cause swollen testicles,” he told his audience – who had to show proof of vaccination to attend the taping.

“But, to be fair to Dr. Minaj, everyone knows there’s no source more reliable than your extended family’s acquaintances in another country. Her report comes straight from the New England Journal of My Cousin’s Friend in Trinidad. Check out this week’s study: ‘I Heard His Girlfriend Got Pregnant From a Hot Tub,’ ” he quipped.

Top U.S. COVID expert Dr. Anthony Fauci also dismissed the rapper’s tale as misinformation, saying, “She should be thinking twice about propagating information that has no (scientific) basis.”