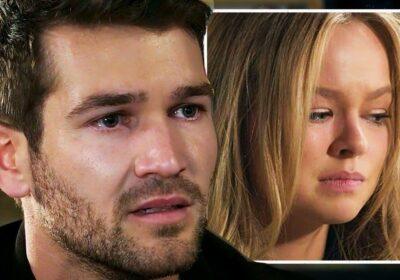 Ned (played by Ben Hall) will be leaving Neighbours in the coming weeks as it was confirmed he was going to be leaving the show before the news broke the weekday serial drama had been cancelled. Over the past few weeks, he has started to develop feelings for the woman he slept with earlier this year, Harlow Robinson (Jemma Donovan), despite being in a relationship with Amy Greenwood (Jacinta Stapleton). In upcoming scenes, he will be left with a huge dilemma on his hands but it seems whatever decision he makes, he could be forced to leave the Channel 5 soap regardless.

The drama continues from this week’s episodes, which will see Ned finally choose Amy over Harlow after weeks of contemplating his future.

Although he thinks he can be happy with Amy, the heartthrob still pines for Harlow and in upcoming scenes, it seems his secret about sleeping with Paul Robinson’s (Stefan Dennis) granddaughter is going to come to light.

It could all be down to Corey Smythe-Jones (Laurence Boxhall), who has recently been introduced to the show as a new love interest for Harlow.

Despite also having feelings for Ned but knowing nothing can happen, Harlow tries to make a go of things with Corey.

Unfortunately, she later admits to her boyfriend they can no longer be together as she doesn’t think they have any chemistry.

Corey takes the news incredibly well, too well in fact as he understands Harlow’s reasons for wanting to call time on their relationship.

Paul’s granddaughter thinks this is the last she is going to see of him but he decides to stick around on Ramsay Street for a while.

The young woman is confused as to why he is still lingering around and has not returned to London yet but she doesn’t realise he has a secret.

It will be explained the newcomer is actually part of the cult called The Order, which ended up ruining Harlow’s mother’s life.

As his plans for Harlow begin to fall into place, she will be none the wiser as she ends up being pushed back into Ned’s arms.

A bit confused herself

With Ned stressed to his limits over the preparations for fashion week at Lassiters, Harlow tries to lift his spirits.

The young woman tells him everything is going to be fine and he listens to her, something he hasn’t always been able to do with Amy.

Seeing Harlow is still interested in Ned, Corey encourages her to confess her feelings to him so they can finally be together.

However, she is reluctant to as she knows her love interest is in a relationship with Amy and she thinks he is committed to his partner.

It seems despite these thoughts, she will find herself gravitating toward the heartthrob and by the end of the week, the sexual chemistry is undeniable.

What neither of them could realise is as they begin to talk about their feelings for one another, the microphones could be on.

This means everyone on the complex would be able to hear what they are talking about, including the fact they slept together.

Finally, their secret would be revealed and Amy would discover her boyfriend betrayed her during their brief break earlier this year.

The fashion designer would be devastated to know this is why her boyfriend and Harlow have been acting weirdly around each other.

It would all make sense and having been treated badly by men all her life, Amy would tell Ned there is no way back for them now.

Seeing the heartbreak they have caused, Harlow could begin to reconsider whether she could have a future with her love interest.

Although they would finally be able to be together, Paul’s granddaughter knows they would never be able to settle down on Ramsay Street.

With nothing left to keep him in Erinsborough, Ned could suggest he and his love interest leave for good to start a new chapter together.

Unfortunately, with her family living on Ramsay Street and needing them close at the moment, Harlow could turn down Ned’s offer to leave with him.

This means Ned would be leaving on his own and Harlow would be heartbroken to know after all this time, she can’t be with him anyway.

The actress who plays Harlow, Jemma, has spoken out in the past about why her character went to London a few weeks ago and the feelings she was having for Ned.

Jemma explained: “I think she escapes to London because her head is quite confused about Ned.

“They’ve been in the family, not technically related, obviously, but he’s always been maybe a brother kind of figure to her, which is probably why they got so close because they talk to each other about a lot of things.

“One thing leads to another, and she just finds herself maybe catching feelings for him. He’s also had this thing with Amy as well, so I think she’s a bit confused herself.

“I think she just needs some time out to figure out what she wants and maybe to sort herself out before she commits to anything.”

But will she have all the time in the world to think about what could have been if Ned leaves solo?

Neighbours airs weekdays at 1:45pm and 6pm on Channel 5.