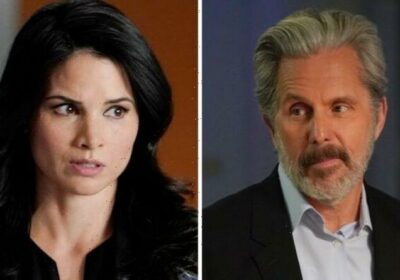 The riveting CBS action drama will finally return with a new episode next Monday, and the first clips of episode 13, The Helpers, have been unveiled. As the NCIS agents investigate the lair of a dangerous cultist, the real threat could actually be right on their doorstep.

After stumbling across a collection of journals, maps and photographs, they quickly surmise an unhinged cultist is planning an attack on Quantico.

However, some evidence suggests the clues could be a ruse, and the bio-terrorist could be actually be planning to infiltrate the NCIS base in Washington.

In the latest promo, Knight and Parker rifle through the cultist’s scribblings and realise there could be multiple threats at play.

“I’m thinking private evil lair,” Knight says, to which Parker replies: “Complete with his very own private evil journal. Looks like our guy’s been busy.”

Knight soon realises something’s off and adds: “Except, that’s not our guy’s handwriting.”

Reading from the journal, Parker says: “‘With righteous vengeance may our unkindness cast our own plague upon the prophets of war.’ Sounds like a manifesto to me.”

Knight then turns her attention to the photographs and maps which have been pinned all over the walls.

“Targeting Quantico?” she asks, while Parker reads further: “‘And let this display our power toward the glory of nevermore.’”

Agent McGee is baffled by the writing as he questions the writer’s motives.

“No idea, but whoever wrote this garbage signed it appropriately,” Parker replies, pointing to the cultist’s signature: ‘Raven’.

Their mark is apparently a big fan of Edgar Allen Poe, Parker remarks before Knight produces what could be his weapon of choice; a bottle containing a deadly toxin.

McGee notices: “Kinda odd that that container’s only half full.”

Knight asks where the other half could be, but NCIS viewers may have already been given their answer.

The official logline for the episode reads: “While investigating the death of an intruder at Quantico, Jimmy (Brian Dietzen) and Kasie (Diona Reasonover) are exposed to a deadly biotoxin.

“The NCIS team calls on Doctor Carol Wilson (Meredith Eaton) for help as they race to find the antidote. Also, Torres tries to distract Jimmy’s daughter.”

Plus, some frightening new images have revealed both Jimmy Palmer and Kasie Hines seem to have been targeted by the toxic chemical.

The attack couldn’t have come at a worse time for Palmer, as his daughter Victoria (Elle Graper) chose the same day to pay a visit to the NCIS office.

Hopefully, the agents out in the field can beat the clock and find an antidote for their colleagues before the task force finds itself without two of their best scientists.

NCIS season 19 continues Monday, February 28 on CBS in the USA. A UK release date has yet to be confirmed.